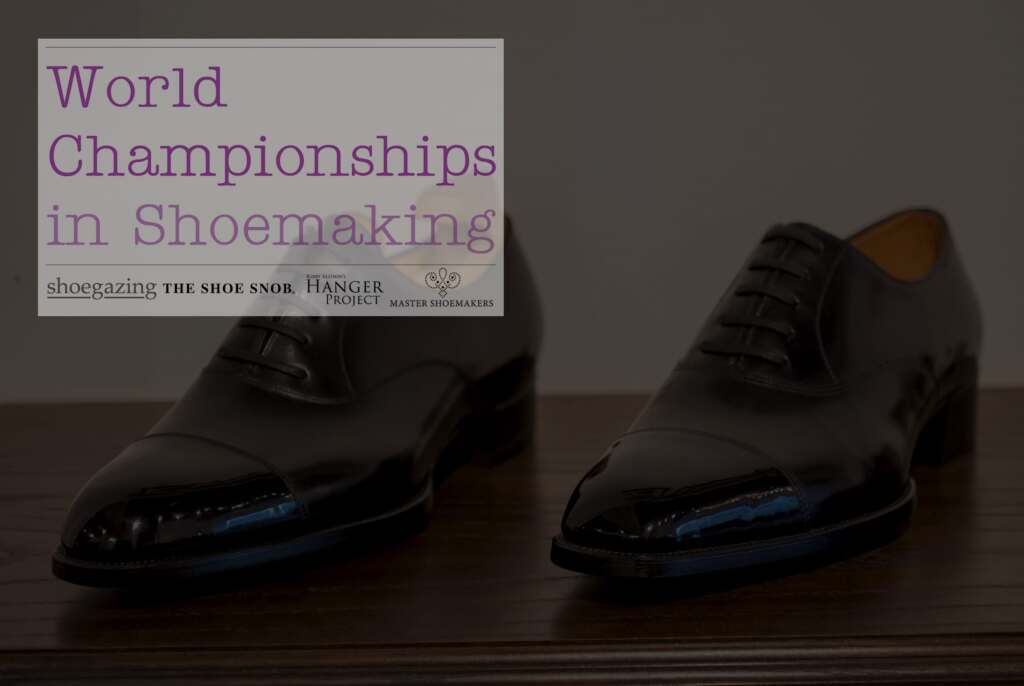 We are very proud to announce the first World Championships in Shoemaking, where the final takes place during the London Super Trunk Show on April 7, 2018. In the prize pool is Ł6,000 (â‚¬6,700) and a chance to be showcased for shoe lovers around the world. Hereâ€™s all the info about the competition.

The World Championships in Shoemaking is organized by Shoegazing and The Shoe Snob, in collaboration with Kirby Allisonâ€™s Hanger Project. Around 100 years ago there were numerous prestigious shoemaking competitions around the world. These competitions pushed the shoemakers in their craft, made them create amazing shoes which not necessarily would be ideal for actual use, but incredible as showpieces. With the World Championship in Shoemaking, we want to bring back some of this. And at the same time, do our best to show the competition shoes to a wide audience, something that hopefully can be a positive thing for the industry and the specific brands/makers. There are some existing competitions today, but they are relatively unknown to a wider audience and/or have the problem that they award basically everyone entering.

Below, in the official call for competition you can find all the details in how it unfolds, and for bespoke shoe brands and/or people who work in making shoes, how they can enter the World Championship. But to summarize it, the contestants will make a black cap toe oxford with a single leather sole, hand welted with handmade sole stitch. The criteria that will be judged are the degree of difficulty and the execution of the making, but also the overall design/aesthetics. 1st prize is Ł3,000, 2nd Ł2,000 and 3rd Ł1,000, plus all podium placed shoes will be exhibited at the Isetan Menâ€™s department store in Tokyo, Japan, and at other stores in various locations around the world (more details will follow later on, but the plan is to create a small exhibition with the top three shoes, which will be on tour around the globe. Shoe stores or menswear stores interested in showcasing this exhibition are welcome to announce their interest to shoegazingblog@gmail.com. It will be free of charge, the only cost is to ship the exhibition to the next venue). On Shoegazing and The Shoe Snob, and in our social media channels we will also showcase all entries in the world championships. 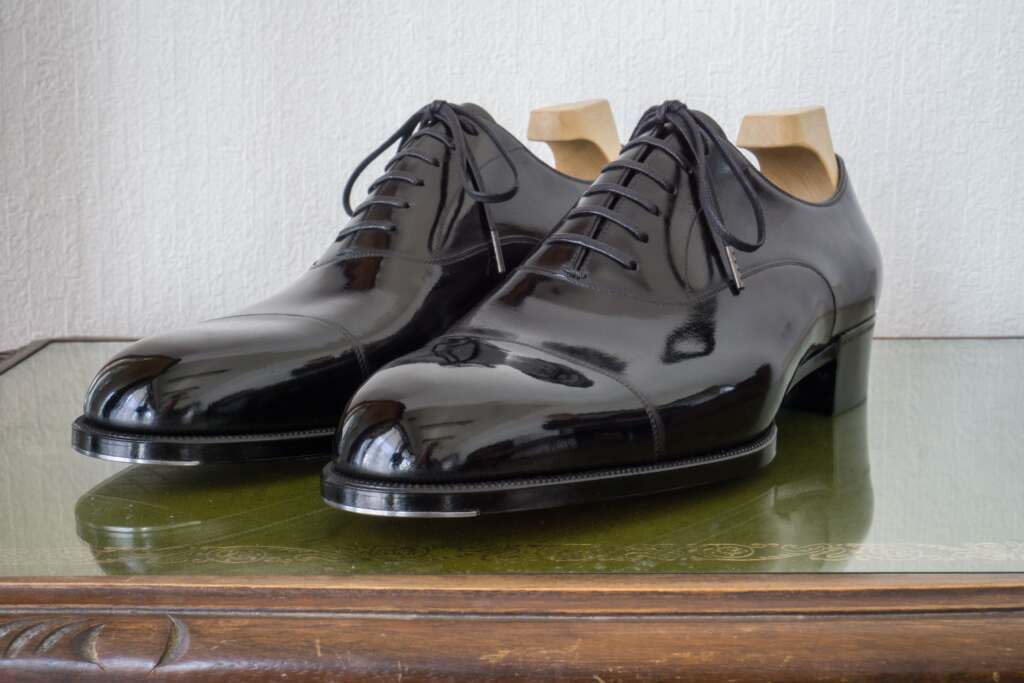 We hope to get a wide variety of brands and shoemakers entering this competition. Both larger, more established firms and smaller less known one-man operations. To enter the competition you need to register by sending an e-mail to shoegazinblog@gmail.com no later than January 15, 2018. Any questions about the competition can also be sent here (do read the call for competition found below first though).

When we set up this competition we have been collecting feedback from several bespoke shoemakers to make sure that we create a competition that becomes as good as it can. We will also learn from this first year, and continue to develop it. In the jury who will review the shoes are several bespoke shoemakers and professionals within the industry, preliminary jury members are Jim McCormack, Yohei Fukuda, Nicholas Templeman and Mario Bemer. But to also add a slightly different view shoe experts Jesper Ingevaldsson of Shoegazing and Justin FitzPatrick of The Shoe Snob are part of the jury, and the two sponsors who are making this event possible: Edmund Schenecker who is a bespoke shoe customer and shoe nerd, and Kirby Allison, founder of The Hanger Project. 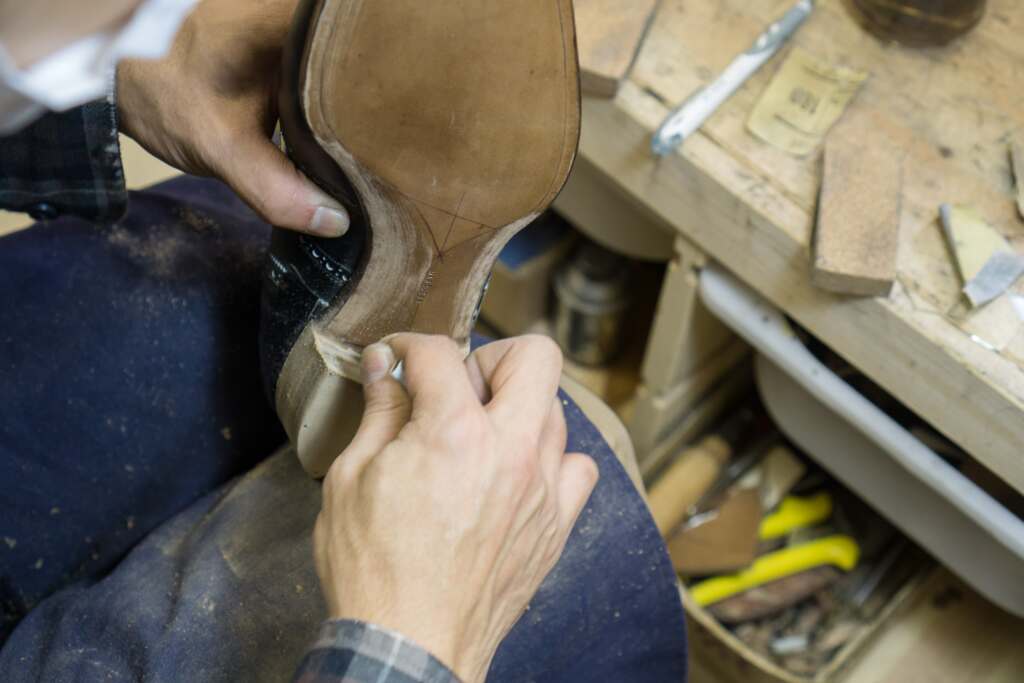 The final of the World Championships in Shoemaking will take place at next yearâ€™s London Super Trunk Show on Saturday, April 7 at the Music Room in the middle of Mayfair. The super trunk will as last year gather more than 10 brands from all over the world (some favorites from last year, some newcomers), and it will host the final in the World Championships in Shoe Shining. We are happy to continue this event after this yearâ€™s success. More on those things early next year. But if youâ€™re into classic shoes, do put a mark on your calendar for April 7, and book your trip to London straight away. And do please help us spread the word about the contest!

Plain cap toe oxford model
One left shoe, size UK8 (or corresponding size)
Black box calf upper
Single leather sole
Hand welted, handmade sole stitch
Black sole and heel edges, natural colored bottom
No branding
Shoes will be displayed without last or shoe tree for the jury, but if shoe tree is provided it shall be displayed in the shoe for the visitors at the event to observe.

Competitors can enter both as a company or as a person. All persons that have been part in the making of the shoe should be stated, and which process(es) each person has made

1st prize: Ł3,000. Name engraved on the World Championship in Shoemaking trophy. Shoe showcased at Isetan Menâ€™s department store in Shinjuku, Tokyo, plus other stores around the world.

2nd prize: Ł2,000. Shoe showcased at Isetan Menâ€™s in Tokyo, plus other stores around the world.

3rd prize: Ł1,000. Shoe showcased at Isetan Menâ€™s in Tokyo, plus other stores around the world.

How to enter the competition:

Competitors who wish to enter the contest need to register to shoegazingblog@gmail.com no later than January 15, 2018 (the minimum amount of competitors we need to proceed with the contest is five entries. There is no maximum). It is free of charge to enter the competition. For any questions, send e-mail to the address above. We encourage brands/makers to take pictures of the making process to be shared after the final on April 7, and we offer the opportunity to borrow a GoPro camera to film the making of the contest shoe. If you are interested in having a camera sent to you, state this in your registration mail.

The competition shoe should be sent to England to be judged and displayed at the London Super Trunk Show April 7, 2018. They have to be delivered no later than April 4 2018.

Address to send the shoe:

The jury will review and judge the shoes on Friday, April 6, at this stage the shoes will be anonymous*. Note that due to this, competing shoemakers cannot show the competition shoes on, for example, social media until April 7. The shoes will be displayed during the London Super Trunk Show event on Saturday, April 7, where the award ceremony will take place at 16.00. Then the World Champion in Shoemaking and the podium places will be announced (competitors donâ€™t have to be in place themselves). All competition shoes will also be showcased on Shoegazing and The Shoe Snobâ€™s blogs and social media channels.

****The jury decision cannot be overruled****

The shoes will be returned to the contestants and can be used as display shoes (for top three, after the tour to Isetan, Japan, and other stores). In the case they need to be shipped back, shipping costs apply.

*Jesper Ingevaldsson of Shoegazing will know who enters the contest, due to him taking care of the registration and answering questions. However, he will not know which shoe belongs to whom when reviewing and judging them. For all other parties of the jury, the shoes will be strictly anonymous. 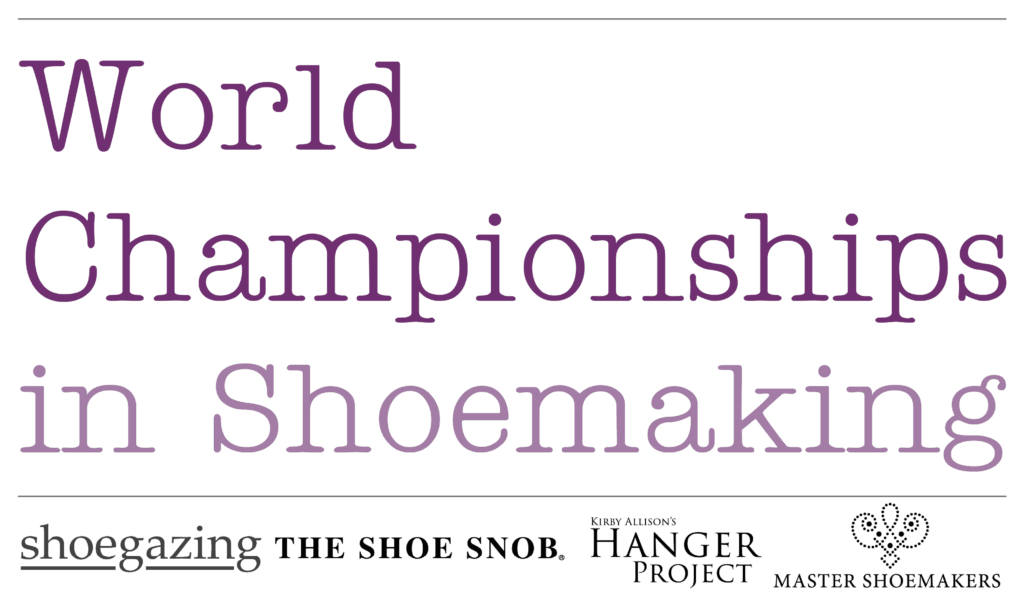 1 thought on “World Championships in Shoemaking Call for competition”