Having been fortunate enough, it has been with pleasure that I have seen (and now lived in) a few different countries in my life. And what always seems to amaze me, is how a whole country can be influenced by the same thing i.e. dress in the same sort of manner. Obviously, you will have those that stand out on either end, being that there will be some who dress great and unique and others who seem to have just completely missed the memo on the simple rules of dressing. But what you do generally find, is that depending on where you come from, there will be a toe shape that seems to be favored by the majority of your culture’s population. What’s even funnier, is that the more that person is into his/her culture the less willing they are to break out and try something new (in the toe-shape world). For example, time and time again, have I seen older American men wanting a certain shape of shoe and if it was not available they would not look at anything else, not even try to see if it may look good.

All of my years selling shoes in America,  I really began to understand just how much the older gentleman of the States love a big, fat, round-toed shoe. Now I am not talking about a round-toe like the one on my first prototype post, I am talking about one that has no elogation to it, nor any shape for that matter. One that is very symmetrical, just like a circle is. Don’t get me wrong, I like a round-toe too, but at least one that has some character to it. It therefore comes as no surprise that the Allen Edmonds ‘Park Avenue’ and Cole Haan ‘Pinch Tassel’ (see below) are among the all-time top selling dress shoes in America.

As I am a young American male, it gives me great displeasure to talk down upon my fellow breathren but when it comes to their choices in attire, I just cannot help myself. Simply put: we are among the worse dressers, especially when it comes to our shoes. The ugliest crazes have come out of the States: Skecher’s Shape Ups, square-toe shoes, the boot brands Jo Ghost and Mark Nason, and last but not least, Steve Madden and Kenneth Cole (see below). Apart from the Shape Ups, the younger American generation embraced all of these atrocities. And to top it off, even after the trends have died they continue to wear many of these awful things, worst of all being the chunky square-toes. It’s sad, very sad….. But I will say, that as bad as we can be, I do strongly believe that my generation (and those younger) are slowly but surely getting better and becoming more conscious of what it means to dress stylish as opposed to trendy. 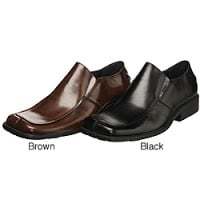 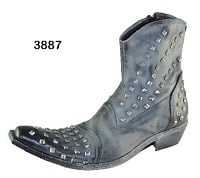 The older men in the UK actually dress very well. Some of their trousers are a bit too baggy for my taste, but nonetheless, they look like gentleman and usually wear classic shoes. With these gentleman, you still find that a round-toe is preferred, but it is a round-toe done with elegance, as would be an old Church’s (pre-Prada) or a classic Crockett & Jones. It has a lot more shape to it, not just something that looks like a semi-circle at the toe. 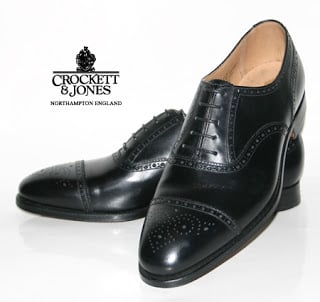 The younger men in England fall into two categories: those who wear winklepickers and those who enjoy a nice British chisel-toe. Now, you will find that the latter of those two is definitely the minority and most younger men are trotting around in their decent suits but with shoes that they found at Office or Kurt Geiger. This bunch reminds me of a more refined version of the younger American men generation, where as they dress nicer but still wear crappy shoes that make them look clueless. But, there are a growing few who seem to have been passed down that generation of style from their fathers, of whom appreciate something a bit more shaped and elegant. This is the bunch making Crockett & Jones rich, and in my opinion is directly related to the creation of one of the most amazing lasts to have been made, the 348. (see below right and top of post)

I can’t really break down these into the two categories of younger versus older, because I believe that in general, you find that men from these countries (whether young or old) tend to lean towards the same thing: elongated shoes. The toe-shape can actually be any design (square, chisel, round, pointy) so long as there is a good amount of space between the end of your long toe versus the end of your shoe. This is a trait that can either be extremely elegant or some cases, extremely offensive. However, you will find that many of the men tend to dress on the more elegant side, whereby they manage to put things together that you would not have dared thought of, but do so in a manner that it is actually impressive. Only on rare occasion do you find the the oddball wearing something so long, it looks as if he was about to go skiing.