Shoes Of The Week – Carreducker One Off’s 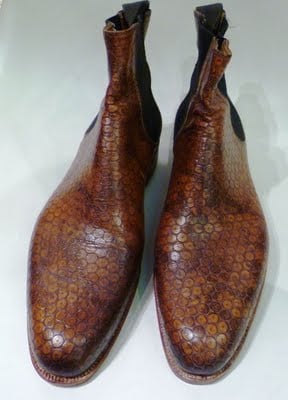 There is a leather factory in Northampton, called Crack’s (for short), which is considered the haven for acquiring leather in this country. And apparently, as you can see by the leather at hand, sometimes you can find some unique and interesting stuff. Now for some of you, this might not matter, but unfortunately this hide here, was extremely limited and just happened to get entirely purchased by Deborah Carre, who made these chelsea boots for herself. And when I saw it for the first time, I was thoroughly impressed, as it looked somewhat exotic, yet it wasn’t, which I prefer, but also had this sequin looking print on it. I thought, I want a pair too! But being a snob, I could not justify making the same pair that someone else I know owns, and potentially wearing it on the same day as them. That would be a no-no. So….I managed to get a skin for myself, wheeling and dealing with Deborah, and decided that after I make my shoes, from my own design, that I would make this leather in a whole cut, as I think that it looks lovely when it is stitching-free. But as sad as it is, I am still chelsea boot free, and have been desperately wanting one, as I think that they make a fantastic jean shoe!
Enjoy the weekend,
Justin, “The Shoe Snob” 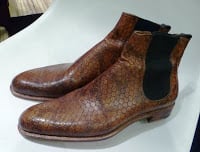 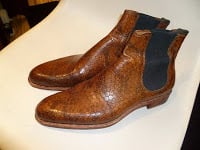 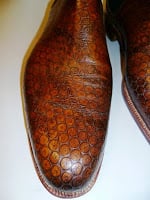 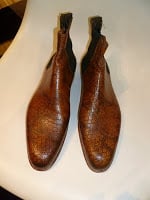