There is a new brand on the block and their name is Petru & Claymoor, of Romania.

They are a bespoke outfit, based out of Bucharest, making handmade bespoke footwear at a very reasonable price and what looks like a very standard of making. It is reminiscent of that Austro-Hungarian look that is found across many of the Central/Eastern countries of Europe (think Hungary, Austria, Romania as well as many makers in Russia too). They are founded by Mircea Cioponea and Petru Coca. I am unfamiliar with Petru’s background, but for those of you prior to the Instagram generation, might know of Mircea from his very good shoe blog, Claymoor’s List, which I believe he stopped attending to in order to focus on his new shoe line. And it is great to see that transition. Mircea is a very nice guy and I hope to see his project do well. If you like supporting good people, please read more and be so inclined to put a pair of their shoes on your list of things to get!

Their project started in January of 2019 although, with the trials and tribulations that we have seen in the world in the last few years, it is has been a bumpy start. But now that they have some good local collaborations under their belt with associations to prestigious golf clubs, Rolls Royce of Romania and Nicolae of Romania the nephew of the former king of Romania – King Michael, they are ready to take it to the next level and start to get seen on a worldwide level.

Their workshop is comprised of a few shoemakers, making all of the shoes entirely by hand (except the upper which is nearly always sewn by hand, by all bespoke makers). Their leather is from Kolde (Vienna) and their soles are JR Redenbauch (the famous supplier of Oak Bark tanned soles). Their heels are stacked, like traditional bespoke makers and each shoe ordered has a trial fit in place before the final product is made. Their prices are as follows:

So, to get your first pair will cost you between 1500-1750 Euros, for a fully bespoke product. I would imagine lasted shoe trees come with that but am not 100% sure on that. And their shoe trees are from Springline, England’s more reputable shoe tree maker.

On top of their shoe offering, they also offer bespoke gloves in peccary and deer. Peccary gloves are always sought after. In fact, I want a pair, especially bespoke as I have a hard time finding gloves that fit as tight as I like them without that terrible excess length! Might have to pick up a pair or two for myself for those chilly months in NYC. 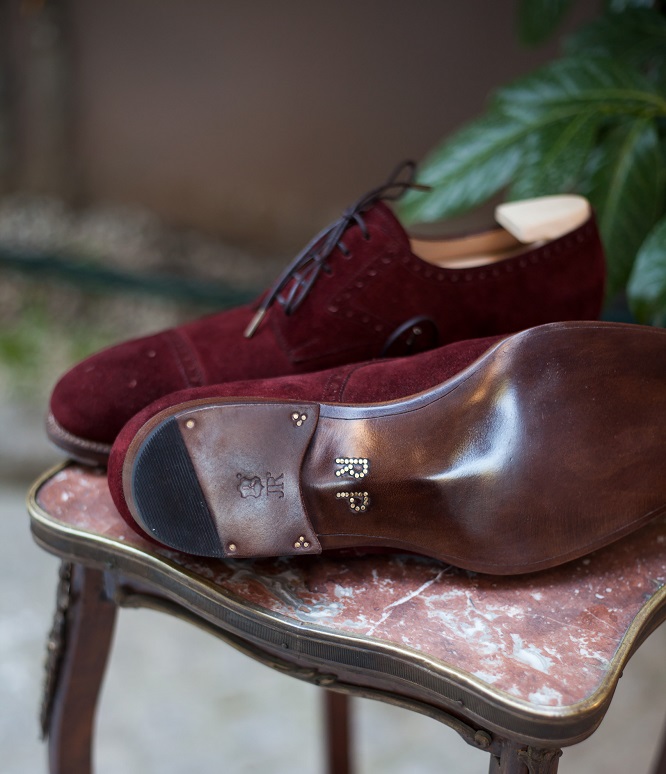 I really like a lot of their collection, most notably the green lizard tassel loafers, the burgundy suede semi brogues and the penny loafers in what looks like elephant hide. I could see myself getting a good amount of use of all 3, but if I was really thinking of something special it would be the lizard in a navy blue for the tassel loafers. Those would be something else!

Now, I know what most of you are thinking. They have a striking similarity to Saint Crispin’s. This is also what I thought. But that is like shoemakers in Hungary also looking very similar each other and sometimes being very hard to distinguish between them. Or traditional English makers. It happens within a country as most aesthetics are built from cultural identity. And while I cannot confirm this but rather simply make speculation, as I know that good shoemakers are not so easily found in Romania, that it would not surprise me if some of their workshop workers might have come from StC’s workshop. After all, sometimes people need a change of scenery.

Nonetheless, they are not Saint Crispins and offer a different, 100% handmade bespoke product so there is no reason to compare the two.

They have lots of plans to start doing trunk shows and introduce a RTW line so do stay up to date with their plans if you are curious to know more about them and potentially try them out. Prices like these for fully bespoke are hard to find in the Western world, so if you do find yourself in or around Romania definitely give them a visit and see them for  yourselves in person!