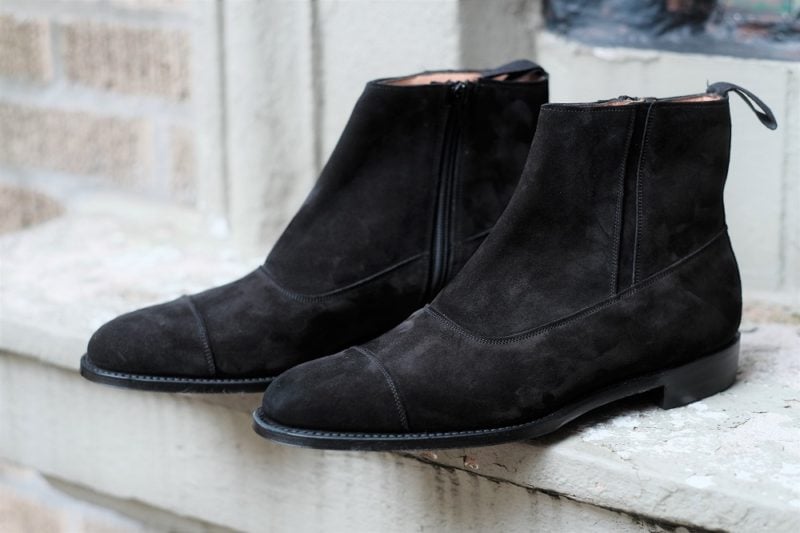 Most of you probably know Herring Shoes. They are easily one of the largest and most successful online retailers of welted footwear in the world. They specialize in British style and making, but have a solid mix of footwear from some other countries as well. What I love is the vast selection. You can find almost anything there as their collection quite easily feels never-ending. Which is impressive to say the least.

I have had the pleasure of owning a few pairs from their branded collection but just got my first pair of their British made selection, under the Herring name and I believe made by Cheaney. I have never reviewed a pair of Cheaney shoes so thought it would be a good time to knock out two birds with one stone. So let’s take a look, shall we? 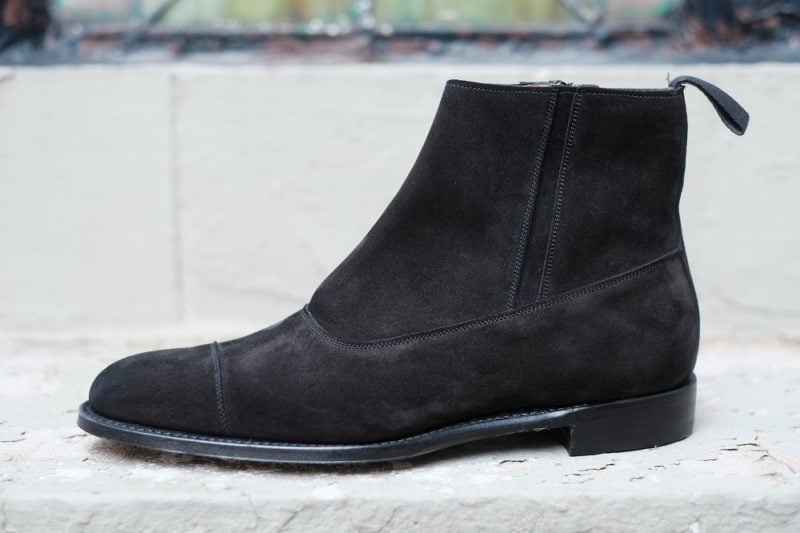 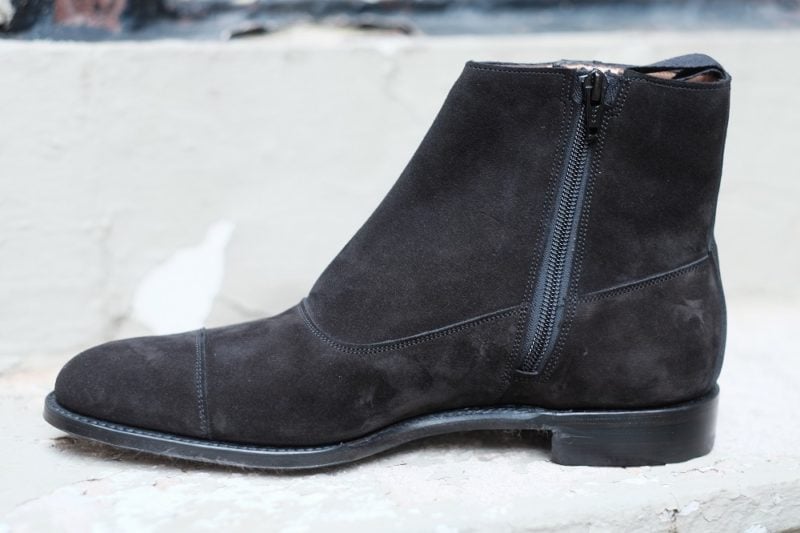 The beauty of most British bench grade shoes, is they fit quite similar to each other. Not exact nor by any means identical but similar in the sense that you tend to stick with the same size. I got my usual UK6.5 size. They label their standard, medium width, as an F and while not wide per se, for me it definitely is generous. But when I say generous, this is not to be confused with sizing down. I like a tight fit with a thin sock. So when it is generous with a thin cotton sock, think Mes Chaussettes Rouges socks, then generous for me, is the ability to wear a lightweight wool sock, which is actually preferable when wearing boots, as those tend to come out mainly in the colder months. Although the beauty of this boot is that it can be worn all year round! Therefore, to sum it up, stick with your usual size. Unless you wear the AE 65 last perfectly, then you might want to size down. 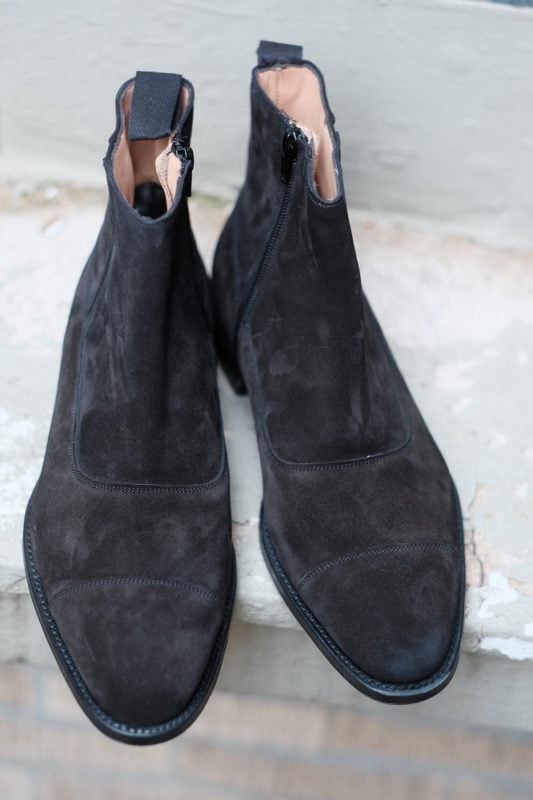 Most British made shoes are Goodyear welted. They do not really do blake and outside Goodyear, they do cemented slippers. These were an open channel Goodyear welted shoe, which is the common theme among the Bench grade lines. However, Cheaney bevels the waists of their benchgrade line which is usually a feature that one gets in a handgrade line. So, it is a  nice touch. The model is a side zip boot, my first pair in about 15 years believe it or not. What I really like about this is how they managed to make a zip boot elegant and classic. By that statement, you can probably tell that I am not a huge fan of zip boots. Naturally, I will always pick laces and/or buttons. But I was impressed by the pattern of this, keeping it very classic and making it almost appear to be a balmoral boot. It was a well-executed design. Good construction/making here. 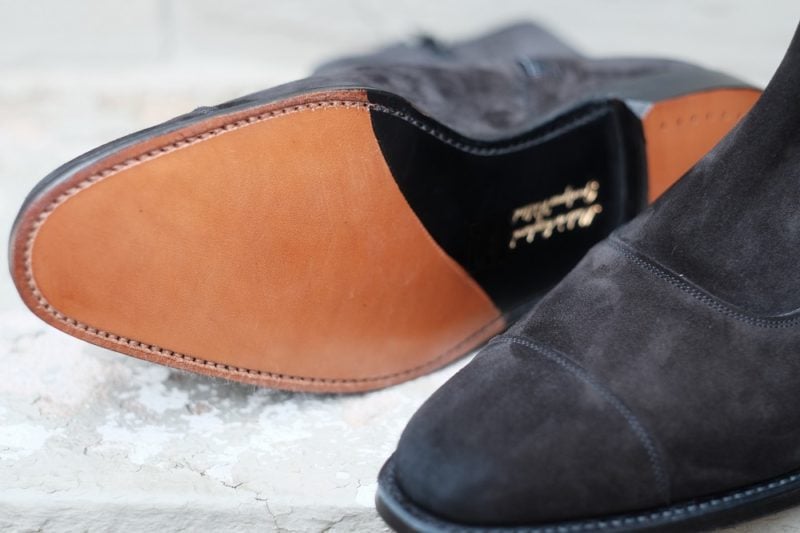 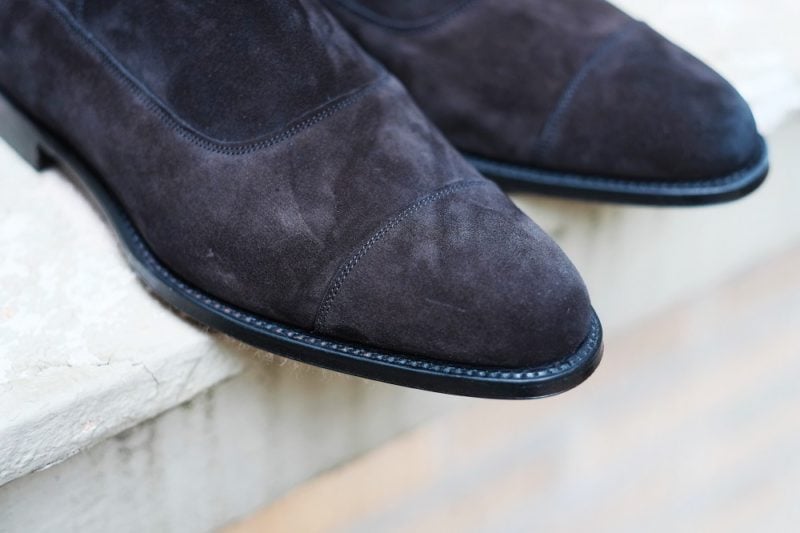 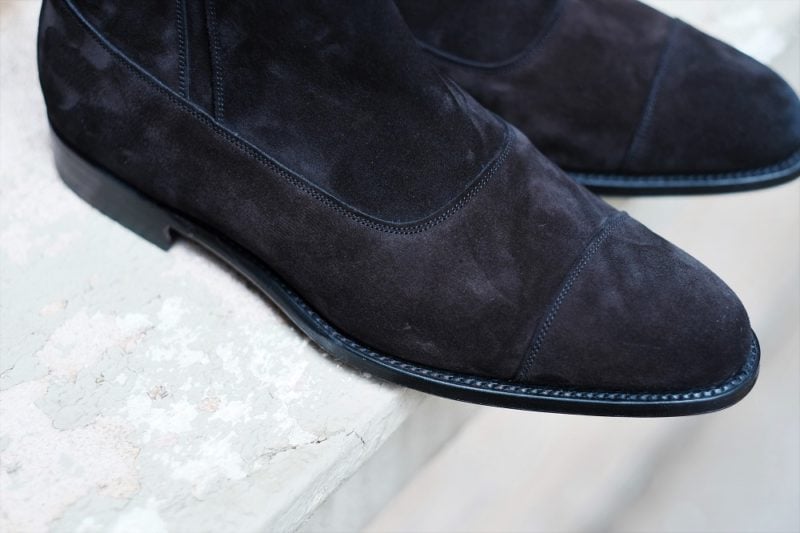 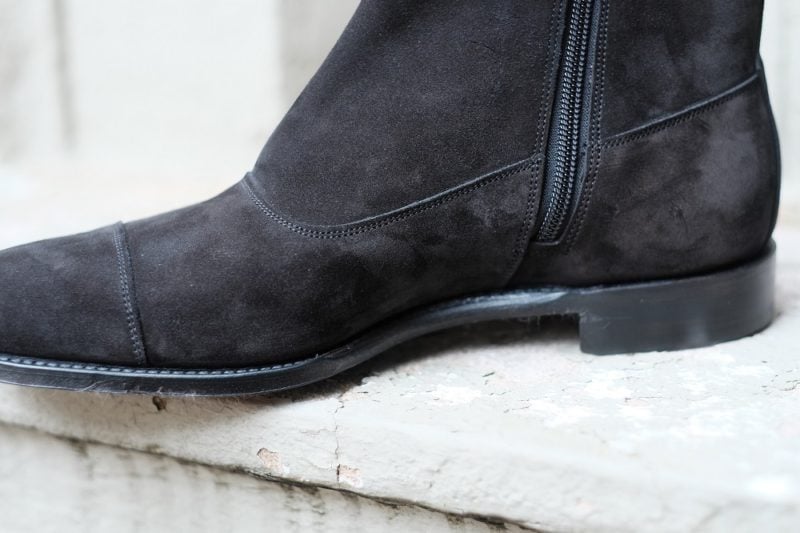 Again, while this might sound repetitive, the reality and beauty of most bench grade makers out of the UK, is that their finishing is almost very clean. It is usually not fancy, but it is clean. It is rare that there are flaws in it. The stitching on the welt/sole is generally very straight and clean. The welt connection is too. It is not a rule but for the most part, the British connect that welt quite flawlessly. I cannot say the same for the Spanish, unfortunately. On this pair, it was clean, as you can see in some of the photos. There were zero flaws/blemishes/mishaps in this shoe. So I commend them for that. Overall 10 for 10 on finishing and as there were no flaws in it, I will not include that section this time around since there is nothing to write about! 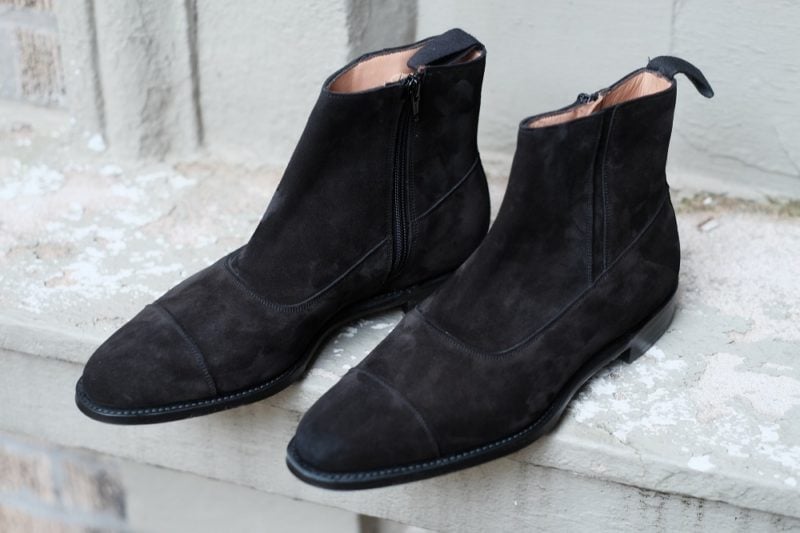 A very solid boot. My only gripe with a lot of the British benchgrade shoes is their last balance and toe spring. And this might be more to Cheaney as I do not recall this with my benchgrade Church’s from 15 years ago. But the slope of the forefoot, with a slight upturn in the toe, creates a pressure point for me in the ball of the foot that sometimes causes discomfort. And it’s not due to bad quality but rather, for me, un-balanced last. This is created by leaving the ball of the foot too rounded on the underside of the last.

But Cheaney is not the only one like this. Carlos Santos gives me this feeling too, as do many lasts shapes that are elongated. It’s a fine line to walk on when balancing an elongated last. So, this was my only issue. And for that to be the only issue, means that overall this was a great boot.

And the good news for all of you that like this boot too, is that this model (and the dark brown suede version) are both on sale right now. The Brown suede pair for $247 and the Black suede pair for $286. Better hurry while sizes last!

Happy Weekend to All! 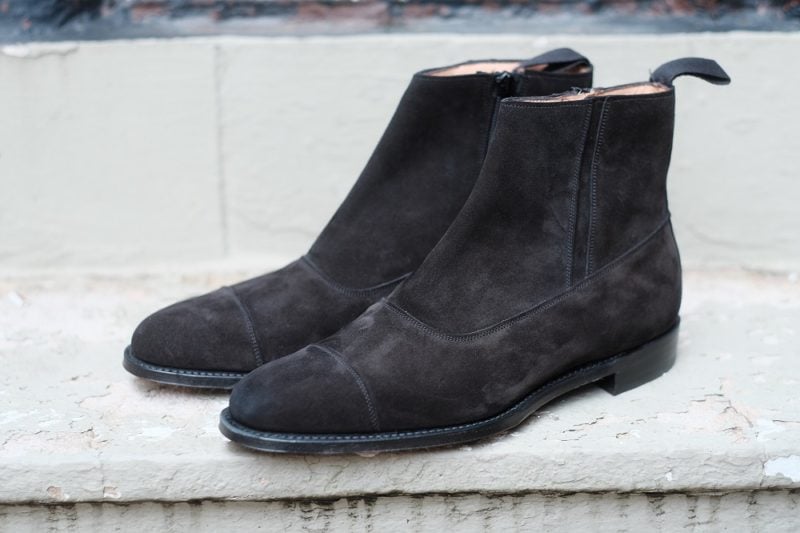 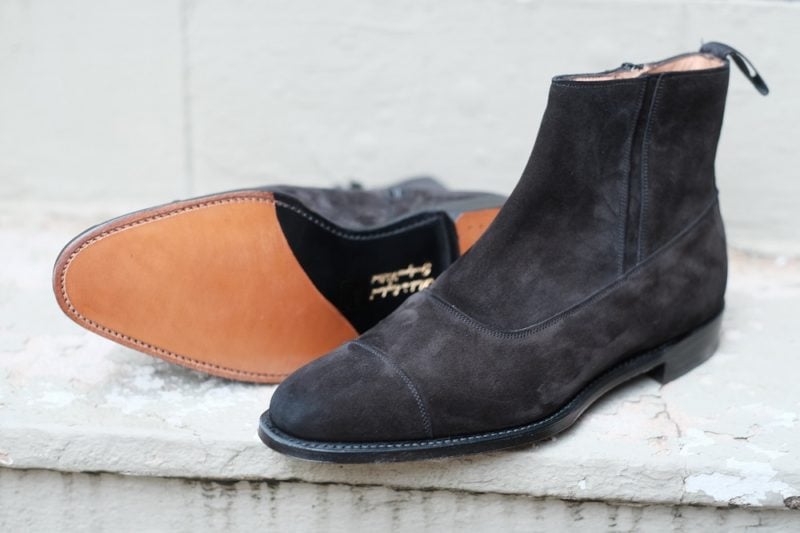 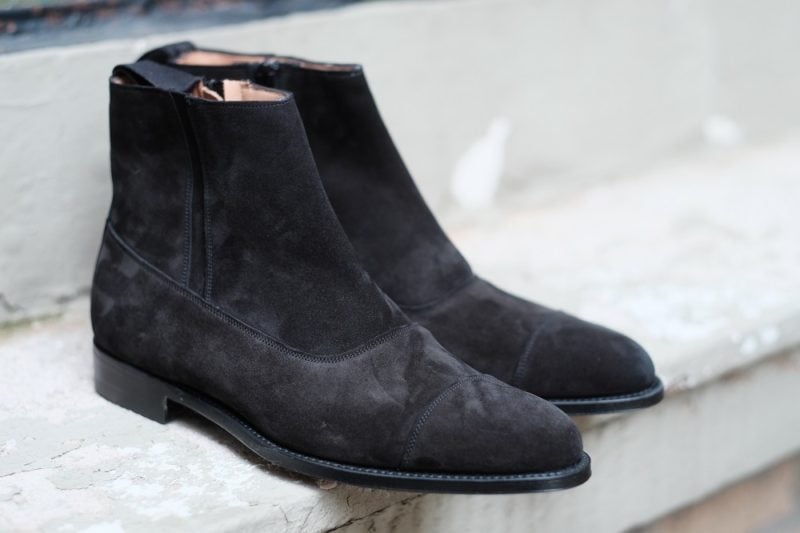 3 thoughts on “Herring Shoes: The Review”