Hand-Stitching The Apron: By Enrile 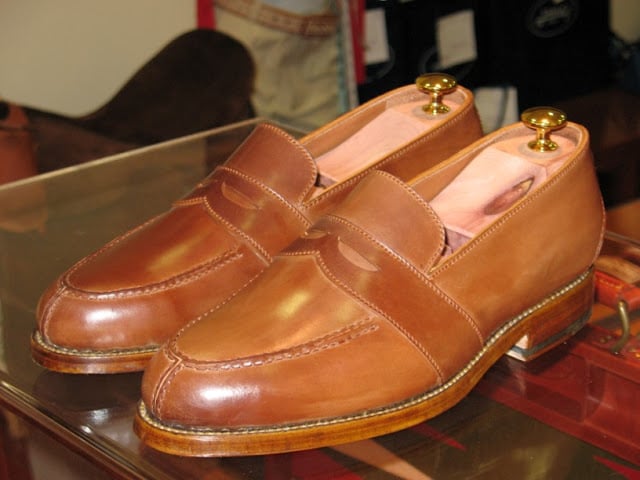 Have you ever wondered why an apron-toe shoe might cost more than its cap-toe or wingtip counterpart? Well, more likely than not, it is because that ‘apron’ (as it is called – the stitching on the toe/vamp area), was put together by someone sewing it by hand. That handwork (as it is called) costs extra money. Now this might be slightly off the subject at hand but I must stress this importance –as I continue to hear incorrect usage of the term ‘handmade’– that this ‘handwork’ does not mean that the shoe was necessarily ‘handmade.’ There is a difference. The reason that I state this, is because not too long ago, I walked into a British designers’ shoe shop, and upon entering (and looking at a pair of shoes), some doorman had the nerve to tell me that the shoes were ‘handmade.’ While I did not say anything in response (as the designer was there as well and I did not feel like having a dispute with my wife around), I was quite appalled by how this guy was just throwing this term around, especially since I have made a pair of shoes by hand. Needless to say, these shoes were not ‘handmade’ and were clearly made by Cheaney, easily recognizable by the insignia inside of the shoe. They don’t make ‘handmade’ shoes (Cheaney), and at best they may do a ‘handgrade’ shoe. This one presented (by Enrile) might well be considered (as this one was welted by machine), for the amount of ‘handwork’ that was put into it. 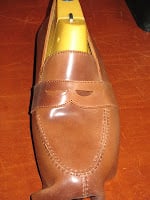 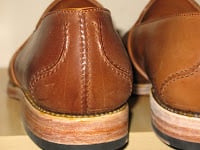 This one presented (by Enrile) would also be considered ‘handgrade’ (as it was welted by machine), for the amount of ‘handwork’ that was put into it. But don’t be fooled, they can also do a complete handmade shoe, so should desire the client…. Now, while I will say that, in reality, having the sole stitched by hand versus machine, really makes no difference when in comes to practicality. There is only bragging rights that separates the two. In fact, having a machine stitched sole (on the welt), will almost always look a lot cleaner than a hand-stitched one. But, when it comes to the apron, a hand-stitched one will almost always look better than its machine stitched counterpart, so long as the person doing the stitching is experienced. But, doing this is very difficult, as it is easy to mess up, and once you puncture that upper leather, it is very hard to conceal it should you have made a mistake. That being, your stitch marks have to be spot on, without any mistakes. This differs with sole stitching as you can make a mistake and hide it with the fudge wheel (the tool that makes the indented edging on the welt). 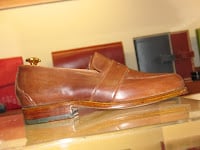 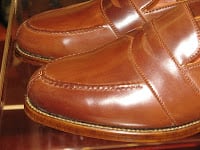 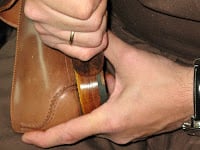 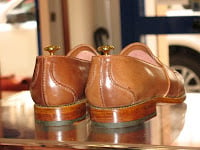 Since as I have done this twice (while apprenticing), I will try to explain it as best as I can, as the pictures only give you so much. However, the way that I did it, was a bit more difficult than the way presented here as the leather was not already split, giving an indication of where the apron needed to be. When I did it, I had to last the upper as usual, but only hold it into place as opposed to completely last it over permanently. That’s because, I had to stitch the apron directly onto the leather while fixated to the last, not while it was just floating about. So after lasting the upper and fastening it relatively taut to the last, you have to draw on the apron (as best as you can) directly to the upper with the magic silver pen (that erases off of leather). Once you feel that you have the apron (two lines – outside and inside) drawn to perfection, that is when you start making the punctures with the awl (needle-like tool) and thread the stitches through. But like I said, every step must be dead on or you end up with some dodgy stitches like the few that were on the shoes that I did (unfortunately I don’t have any pictures….sorry). Nevertheless, stitching the apron by hand is one of those details that just really makes the shoe look nicer. Not that it makes a huge difference in whether or not the shoe holds up, but it will always be an added touch of luxury!

8 thoughts on “Hand-Stitching The Apron: By Enrile”