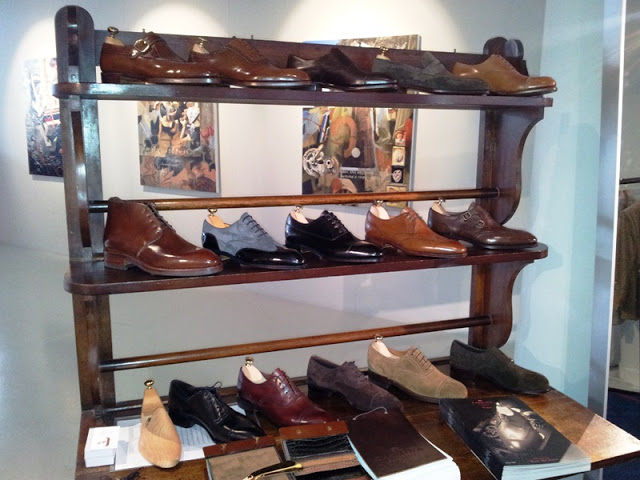 As some of you may remember, a little while back I had the pleasure of being involved in one of The Armoury’s trunk shows, located here in London. At that trunk show, I had the first opportunity to truly appreciate the level of shoes that Carmina produces. Prior to this, I was always hearing about Carmina shoes but never really had the ability to judge them for myself, other than shining an old pair for a customer (but that doesn’t really count!). As I had always heard positive things about them, you can imagine that I was quite curious to see what all the hype was about. Little did I know that I was going to be in for a big surprise. 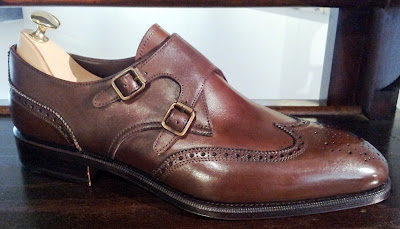 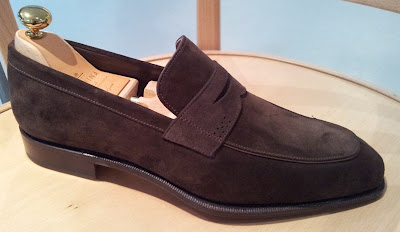 Upon arriving at the trunk show, I was met with the display of shoes that you see at the top of this post. Being the ‘little kid in the candy shop’ that I can be, I was in awe of almost every pair and began touching, analyzing, smelling the leather and pretty much everything else that I could to take in (and mentally record) the shoes’ quality. Not long after, the daughter of the present owner (and possibly founder) came in and we began discussing much about the brand, who I was, and my future shoe line (as I was no doubt wearing a pair of my own). She was a very kind woman (who handles much of the business side of things) and it was very nice to actually meet someone from the Albaladejo family, a family that I believe to be synonymous with high quality footwear.

Even though I was not in the market to buy anything (as I need another shoe like I need a hole in the head), I couldn’t help but try them on just to see how they measured up to other brands. They had two lasts on hand, one being the Simpson (my favorite – shown here) and the other being the Robert (I believe?? – not found on the website), which was a bit more conservatively elegant and rounded. Both of them fit me surprisingly well. I say that because I have quite a narrow foot and many shoes seem to be a bit spacious on me, yet these were not in least. They were a very sturdy shoe, on the verge of being stiff, but also signifying, for me, a well-made shoe that could last a lifetime! Not only were they well made, but very comfortable in the fitting as well i.e. in the way that they hugged my arch. I felt supported properly, something that is quite important when buying leather soled dress shoes that you might spend a whole day in. 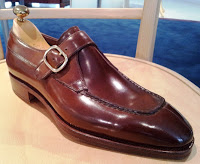 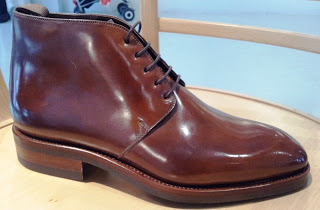 I have said this before, and I am going to say it again: shoes made in Spain are on their way up. They can make shoes that are just as good as their English counterparts, at least within the mid-range of high end footwear, think Crockett & Jones and comparable. Carminas, for me rival C&J Hangrade, but cost a whole lot less, significantly less, and I dare might say that while the leathers they use might be a bit stiffer, their level of making just might rival an entry level Edward Green. I know this is bold to say, but I can’t help but tell you that it is true. As the Spanish continue to make footwear and climb the echelons of quality, I dare to say that one day you will find them rivaling the best of them, being able to produce handgrade footwear with all of the bells and whistles that separate the lates from the greats! Mark my word….

Carmina Shoes Available Online: Here or at
The Amoury 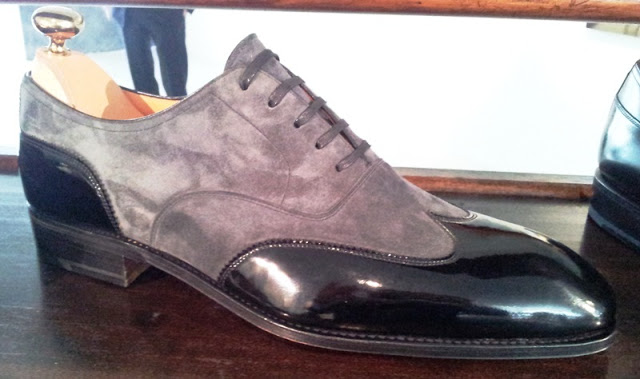 11 thoughts on “Carmina – The Spanish Conquistadors”