The Importance of Toe Taps

Growing up in America and selling shoes at Nordstrom, I never really understood what toe taps where all about. I had seen the ones that are simply nailed on and look like little boomerang’s (you know the ones you can easily kick off and are pretty much worthless? Yea those ones!), but had never seen anyone with a pair of proper toe taps on. Occasionally I had seen (or better yet heard) the few people –who for some reason I don’t understand– wear heel plates (with as fast as you can replace a heel’s top piece those outdated loud bits don’t make any sense in this day and age). Like anything, most things in the sartorial world are lacking in America for two reasons; 1. Availability and 2. Lack of education. Maybe it’s changed now, but I bet that there are few cobblers in the US who can install a pair proper toe taps, for that matter you don’t find many here in England neither, whereas in France and Switzerland it’s like second nature. So it’s not just the US in this case, but a worldwide issue: understanding the importance toe taps play in maintaining the integrity of your sole’s toe region. 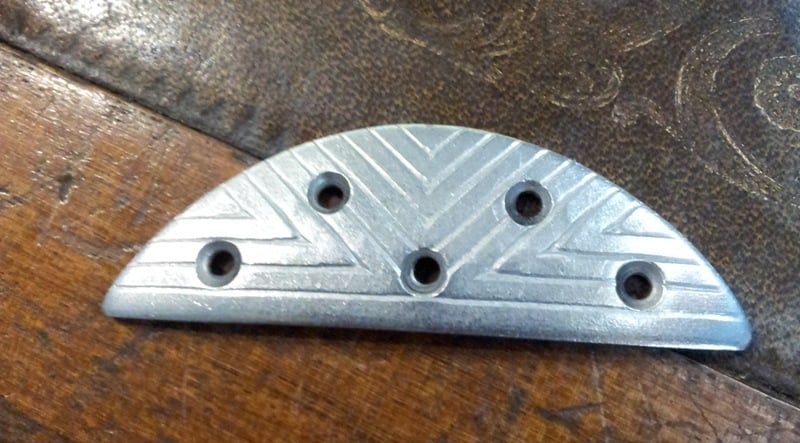 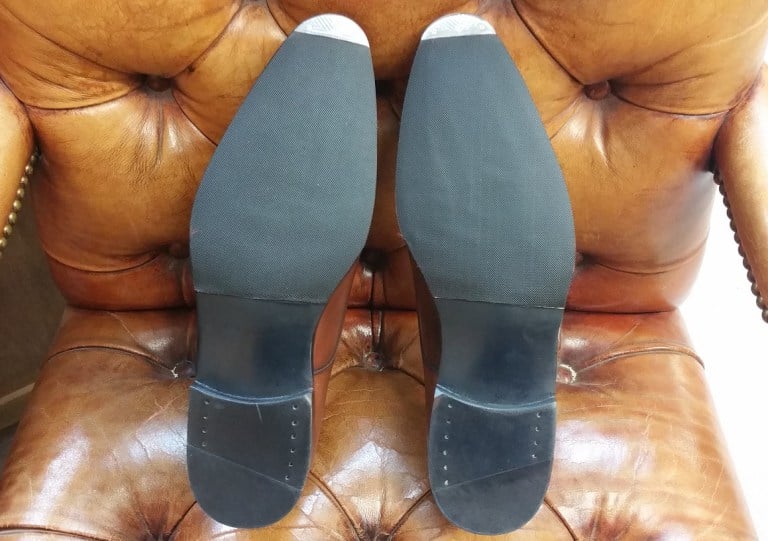 The natural way we walk as humans automatically harms our toe’s region due to our weight/gravity and the spring we put on every step in order to make the next one. And that constant grinding on the pavement wears down the sole in that area, especially if you are a hard walker like I am. That being, if you wear welted shoes, you could easily chew through the sole and start grinding down your welt. And the problem with that scenario is that while we can always get re-soles, most people cannot replace a welt as you basically have to make a new shoe. Therefore if you ruin your welt, your ruin your shoe. And that is on welted shoes not to mention blake stitched ones where you basically start chewing into the leather of the upper which is even worse and irreparable.

A lot of times too, if you do not put on toe taps it can lead to premature resoling as you get down to the welt but still have a lot of life left in the actual sole and if you do nothing you run the risk of starting to damage the welt. So that initial protection can ultimately double the life of your sole in reality.

On a more aesthetic note, it just looks bad when the front of your shoes are all chewed up and more than half worn down and all the edging dye worn off. That is a rookie mistake and look. When wearing nice shoes your toes are the bits that everyone looks at and appreciates and maintaining that region not only shows how much you appreciate your shoes but also how aware of a person you are, which can speak highly of yourself in a non verbal way.

In the upper echelons of welted shoe brands, you find that all of them offer a closed channel sole. For those of you that don’t know what that means, well basically when the sole is stitched on, you can do it two ways: 1. Showing the stitch (open channel) or 2. Hiding the stitch (closed channel). While the closed channel sole is a sign of quality shoes, it does have one flaw. You see, in order to close the channel, you have to cut into the sole to make a very thin flap (see pics) that then lifts up to allow you to sew the sole on. Once sewn, you then close that flap down to thus ‘hide’ the channel stitch. But you see, closing that flap is done with shoe glue/cement etc which is not indestructible and can be reopened over time, particularly in wet environments as water is one of the elements that breaks down glue’s holding components. The channel often starts to lift at the toes and works its way down. So getting toe taps actually helps to prevent that from the very get go. 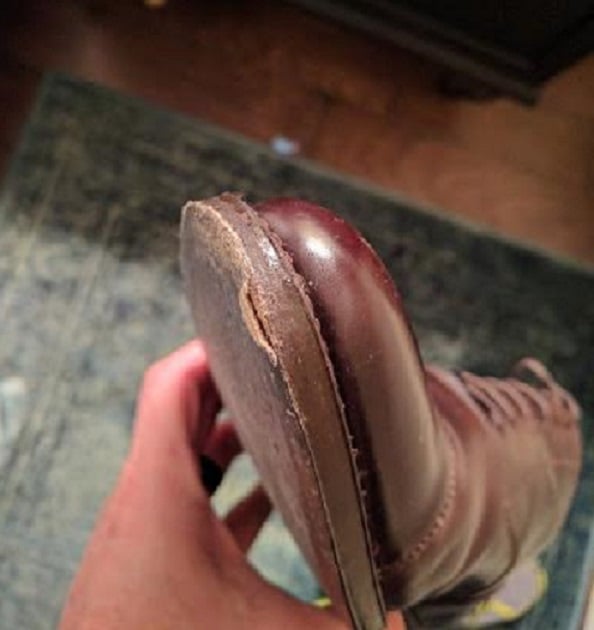 — This is actually not true at all. Heel taps make noise and a lot of it. Toe taps really don’t make any, unless you start tap dancing with them. But walking like a normal human being you would be surprise to ever hear them striking the pavement. The one exception might be marble flooring, but the noise would still be minimal.

— Yes and no. On most floors they won’t providing that they were affixed properly. You see, they need to be properly sunken in and sanded down so that no sharp edges are sticking out, which will indeed scratch floors and other things for that matter. But that is down to the person that affixed them. If put on properly, the only floor they would/can scratch again is marble flooring. All else is quite safe.

3. They can harm my welt/channel stitch

— Again this is down to the person putting them on. Yes, if the cobbler/shoemaker does a sloppy job and cuts too deep into the sole, then yes, it can expose the welt and/or channel stitching. Again goes for screws that are too long. But providing the cobbler/shoemaker knows what he/she is doing, then this is a non-issue.

4. Once I have worn the shoes, I cannot have toe taps installed?

— No, actually a good cobbler can build up your sole with leather and add them after the fact. But it is best doing it on a brand new pair of shoes.

If you wear nice shoes, you need toe taps especially if you do any sort of walking on anything outside of carpet. Fair enough, if you go from front door of your house, to car in driveway/garage, to underground car park and then carpeted work place, you don’t need them. If you walk on pavement and suffer through rainy days, you need them. It’s that simple really. And you especially need them if you are a hard walker. Look at the picture below of my bespoke shoes that I have worn probably less than 20 times. You can see, that I even wear down the toe taps quite significantly. Imagine what I would do without them on?!

Places to Get Them Installed

— Many brands these days are offering them as adds on to your shoes when you buy them, such as J.FitzPatrick Footwear, Carmina, Gaziano & Girling, Vass and Saint Crispins.

— If you are London/UK based, you can get them installed at Tony’s Heel Bar in Crown Passage. Prices are ?30 per pair (with brass screws) and shipping to UK from ?8

— If you are New York City based, I believe that B.Nelson Shoe Repairs offers this service. Prices are $45 per pair (with brass screws) and shipping to US from $20 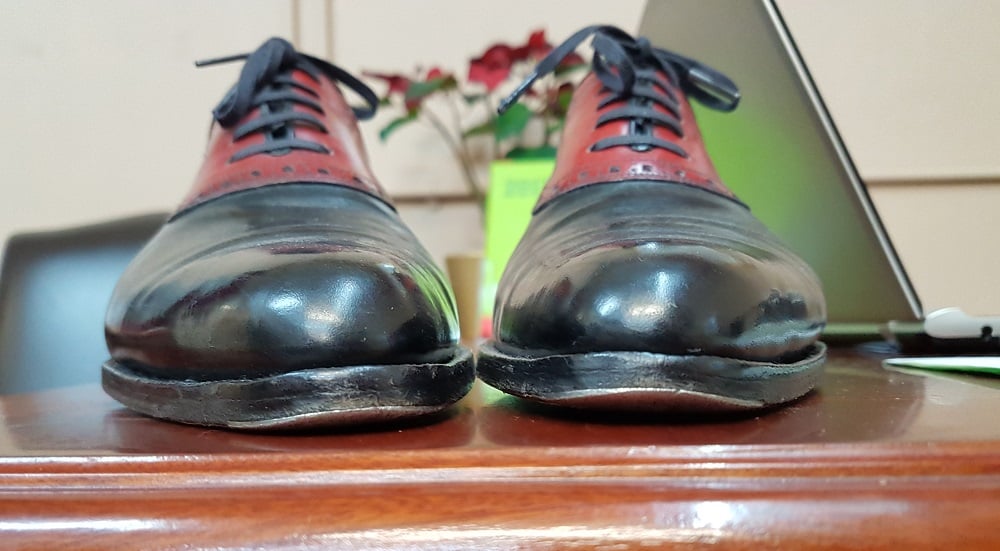 45 thoughts on “The Importance of Toe Taps”