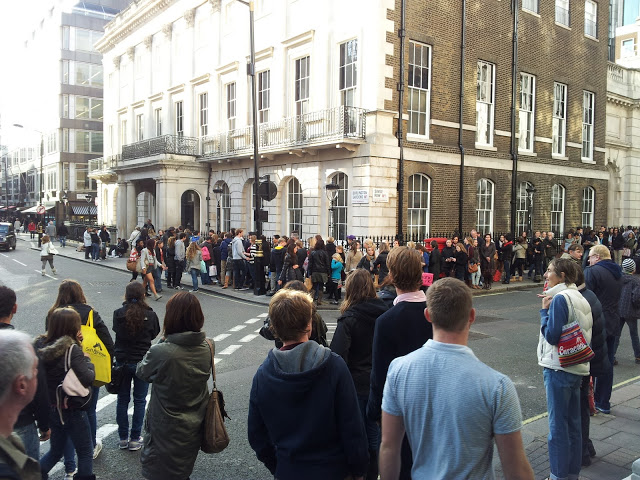 I know that I am the ‘Shoe Snob’ but sometimes I just can’t help myself with other subjects. That being, you might be wondering what this picture represents. To me, it represents just how intelligent a company can be at manipulating people, and how sheep/cattle-like we can be as human beings. For others it might represent a shame to Savile Row, or maybe a clever marketing strategy on the company’s part. All this being, allow me to tell you that this is the line (queue) outside of Abercrombie & Fitch, just across the street from Gieves & Hawkes, that wraps around the corner. I see this and frankly it disgusts me, not only because I hate A&F but also because I, personally, don’t believe that a shop like this should ever be allowed to grace the corner of a street that has been built on tradition, craftsmanship and excellence. Savile Row is a street, that in my opinion, should not look like the high street, should not have 15-20 year old tourists flocking about, blocking entrances to other stores and loitering around as if it was the park. A company that brands itself by selling the image of sex should not be allowed to be so close to other companies that built themselves on the quality of craftsmanship.

While I stood outside for the 20 seconds it took to take this picture, 2 separate people asked me what was going on. I was ashamed to say that it was just another Saturday in front of Abercrombie & Fitch, where people mind-numbingly stand outside for long periods of time, just to enter a shop that sells rubbish stuff.