Additions To Your Sole

There is much debate on whether or not one should add things to his/her sole to make them last longer/protect from the elements. Some argue in favor of adding rubber/metal, others swear that it actually ruins your shoes in the long run. But who is right? Well, while my word is not fact, I will put my two cents in and break down both the for’s and against’s in order to come to a conclusion that appears logical. First and foremost, allow me to say that there really is no right or wrong, especially as the idea of adding things to make your shoes last longer really depends on many factors such as where you live (i.e. the weather), how many pairs of shoes you have, whether or not you use shoe trees, how hard you walk, whether you commute by foot or car etc…. So you see, while one answer may be right for one person in California who drives to work and lives in a hot climate, it won’t be the same for the guy that lives in London, takes the tube every day and doesn’t wear galoshes on rainy days. 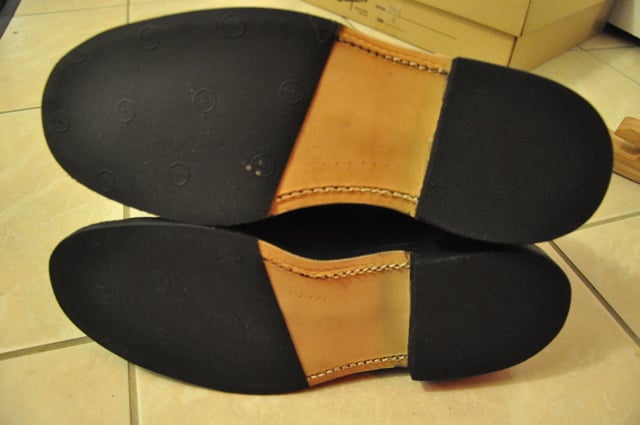 The biggest debate seems to come from the idea of adding rubber to your sole as a ‘top piece.’ Now let me say that I would never do this personally. But that does not mean that I don’t condone it either. As I said earlier there are many factors that will take place to make an affirmative statement on whether it would be more of a help or hindrance to your shoes so lets start looking at the pro’s and con’s. For those that argue against Topy soles, they claim that it is either going to put your shoes off balance or not allow the sole to breath, thus ensuring that you deteriorate your insole much quicker. For the first claim, I wholeheartedly agree. BUT, that is only if the added rubber bit is not put on properly. You see there are two ways of doing it: 1. slabbing it right on top with a bit of cement (the wrong way) and 2. skimming off the top layer of the sole (same thickness of the rubber) to add the piece and have it lay flat as if it was the sole (the right way). Doing it the right way ensures that you don’t loose the balance of the last. So as long as you have it done properly that claim becomes invalid. 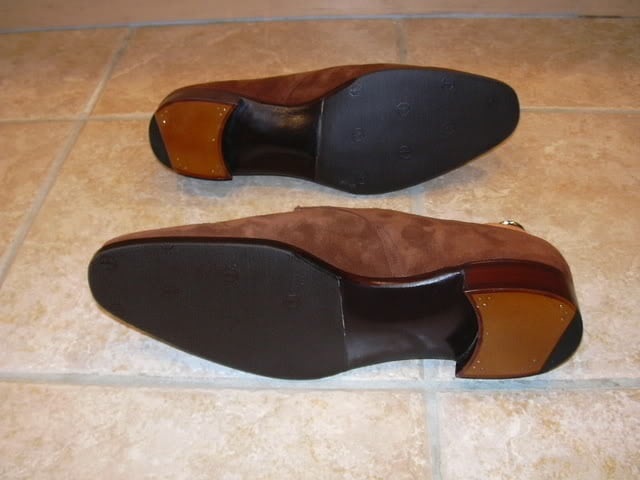 For the second claim of not allowing the sole to breath, well this is where it becomes a bit more case by case and will very much differ depending on several factors. If you live in a warm, sunny climate, it does not make sense to ever put added rubber pieces to your soles. If you do it for comfort, then you need better supporting shoes, not added rubber pieces. Or simply buy shoes with rubber soles. Assuming that the claim that the sole does not breath with an added rubber piece is true, a sunny climate will only make your insole deteriorate that much quicker as your feet will perspire more in the warm weather. Now, in a wet/cold climate it can very much make sense to add a rubber piece as the constant moisture exposed to your soles will have you end up replacing them on a much more frequent basis. Now assuming that it will not allow your soles to breath and thus affect your insole, well then what are shoe trees for if not to absorb moisture from the insoles and leather? But then again, many people don’t perspire all that much and if you don’t, then it won’t affect you as much anyway, not as much as living in a wet climate will affect the overall health of your shoes.

But the real question (and think about this carefully) is that if adding a rubber bit to your sole makes it so that your sole can’t breath which will SUPPOSEDLY corrode your insole from all of the moisture then what does having a goodyear welted shoe MADE with a rubber sole do to your insole??? Do rubber sole shoes last less than leather soled shoes?? NO…So you see, this right here is where the whole myth is debunked. Because in reality it is not about whether or not your soles can breath but more about how bad you perspire as a person and then whether or not you use shoe trees, and whether you rotate your shoes, whether you walk in puddles or purposefully avoid them and this and that….don’t listen to the hype. Adding rubber pieces to your soles is fine so long as it is done properly. But I will say that I would never do it. I personally believe that a shoe should be worn how it was made. But that is just me and also because I have about 50 pairs of smart shoes so none of them ever really see any hard use. If I only had one, I would probably think differently….. 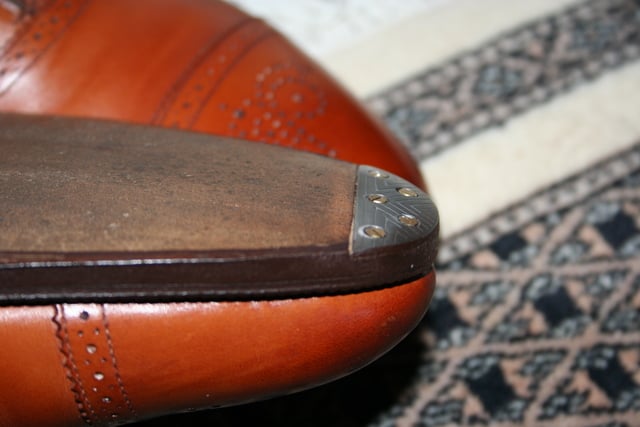 Now the last bit is about adding metal. If you walk a lot, you should have metal toe taps. Not blakey’s which are just banged on by a hammer and nails, but indented toe taps that are flush with the sole and in theory, screwed on. They don’t make noise but are detrimental to your soles toe region and ensuring that you do not prematurely wear that area down before you need a re-sole. Metal heel plates, however, are a no-no. Not only are they loud, but also slippery. And in reality it does not cost that much to replace your heels top piece and you can do it a million times. And if you really want to get technical, you can do what many of the Parisians do: adding both a rubber bit to your sole and indented toe taps. Then your shoes will last forever!

For those of you London- based, then please go to Tony’s Shoe Repair in Crown Passage to get your toe taps affixed. (That is where I go).

37 thoughts on “Additions To Your Sole”