For those that may have not ever heard of this name before, allow me to give you a brief intro on exactly who is Mr. Thomas Kalflo. First and foremost he is a very talented, young Parisian gentleman who above all is an artist. His drawing capabilities are second to none and with his artistry background, about 5-6 years ago he decided to dive into the world of Patina, first at Corthay and then for 3 years at Gaziano & Girling, quickly becoming (in my eyes) one of the best patina artists in the world. He is currently based out of Paris and is something to watch out for, for the future. That being said, please read further to see what he has to say.

– What is patina to you?

– Like last making or pattern designing I believe patina is an additional creative step of the conception and the realisation of a crafted pair of shoes. It has a great influence on the look of the final product and can dramatically change the perception one has of it. In that respect it is a tool that allows great freedom and that can require some consequent creative ressources. It also is the creative part on which the client can be more involved as one patina can be discussed and created for an individual fairly easily, which is much more difficult when it comes to pattern or last, unless you go for full bespoke (and even in this case not every makers give their clients a great creative latitude). If I had to pick one word to define patina that would be freedom.

– How did you start? Were you self taught or someone guided you?

– When I started working in the industry I was a salesman for Corthay in their historic boutique in Paris, rue Volney. I was working alongside the only other salesman that also happened to be the person that developed their patina techniques and range with Christophe Corthay, Pierre’s brother. I was fascinated with Stephane’s work and got him to teach me within the first few weeks. The man showed me all he knew during a whole year and guided me until I was ready to work completely by myself. The beauty with craftsmanship is that you never stop learning, and that while part of it can be taught, another part you can only learn by yourself through trial and error. During the next few years, first with Corthay and then in London with Gaziano & Girling, I improved my technique a lot as well as discovered new approaches of the craft and new ways of working. Seeing other people’s work had a lot of influence on the evolution of my creations.

– What was the most difficult thing to learn in the beginning? Or that you still find challenging?

– The real difficult thing to understand with patina is that it is a reading job. You need to be able to understand before starting the job, or very quickly after starting it, how is the leather going to react. Every shoe has a different response to dye to the one next to it. Sometimes bits of the same shoe won’t have the same reaction even though the leather looks absolutely identical. The way it absorbs the dye or the way the pigments reflect can differ and give variable results. Anticipating all this comes with experience and the is no real shortcut for learning that. That is to me the key challenge, becoming a good reader so you can adapt accordingly. I now consider myself as a competent reader but I still get the occasional unexpected surprise!

– Where would you like to see the world of patina in five years?

– I would love to see the average standards of execution of the trade going well up in the years to come. I believe the current level of self-expectation from the average patina craftsman is very low and that pretty much anyone can entitle itself which demonstrates the lack of ambition of the trade overall. Maybe it would be great to see a kind of institution appear, that could teach the craft and set decent standards so we could see a new generation of qualified craftsmen appear.

– What other patina artist do you admire?

– First of all the man that taught me the basis of the job: Stephane Villette. The guy is a natural, and I have never seen anyone that fast, smooth and precise. He is the one that gave me this obsession for high self-expectation in my work. Another one that is really worth mentioning, even though he has stopped doing patina now, is Hom Nguyen. He is an artist now, but he is the one that opened so many doors to us more than a decade ago. He used to do the most impressive drawings on shoes and leather goods and he is definitely one I look up to. The in Italy two craftsmen are of great inspiration to me: Alexander Nurulaeff and Ivan Crivellaro. Every one knows Alexander as he does a great job with the Dandy Shoe Care. Crivellaro is a maker more than a patina craftsman but has a very interesting approach to texturing his upper leather and he had a great influence on my work as well. 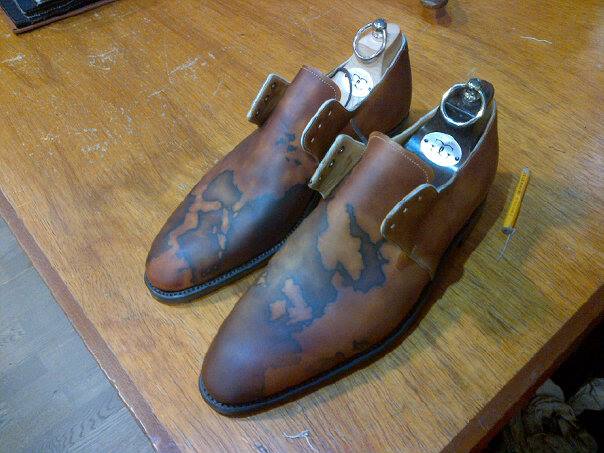 – What is your special patina skill? What sets you apart from others?

– To be honest I do not believe that I master a skill that no one else does in the trade. Let’s say I’ve got a very complete set of skills, and I can do everything that I’m aware exists. I’ve trained many years in arts and my drawing skills are descent which gives me a great deal of freedom regarding the extent of weird demands I can accomplish. I can create precise tattoos and drawing on the upperleather and the sole, but again I am not the only one that can.  Also I’m obsessed with delivering an excellent job, whatever difficulties I encounter with the leather, but I’m still not the only one.

– Is patina a trend or will it stand the test of time?

– I think that is down to several factors. The trade can only survive if the overall average level or delivered patina is good to excellent, which is clearly not the case  these days, where the vast majority of patina are extremely poorly executed. I believe the market is getting slowly but surely educated, and it’s level of expectation is rising. The moment where the market will be flooded with horrible super harsh patina we will see a phenomenon of rejection toward the whole trade and opinion leaders will go back to neutral plain leathers. And that’s where the story will most likely end. Finely executed patina takes time to learn and achieve. It is therefore not very viable for finance driven brand owners. Therefore producing cheap patina with a poor result is a very profitable but short term option that will kill the trade for everyone.
To sum it up: I think mediocrity will kill patina.

– Are you involved in other facets of the shoe industry?

– I have spent the last few months learning pattern designing with a man that used to run John Lobb Paris bespoke. This gentleman says that patina is the prolongation of other skills. I think he’s right and I want to acquire these skills now. I’m trying to find a place where I can learn last carving.

That’s all folks. I hope that you enjoyed it and if you want to get in touch with Thomas for any business related reasons you can find him HERE. 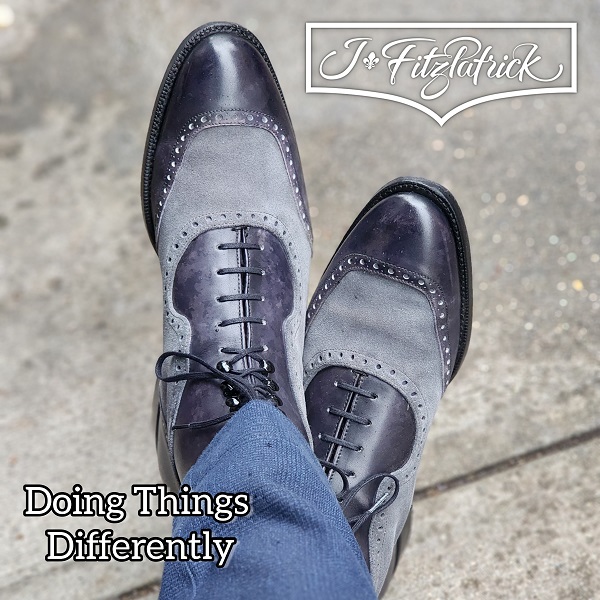