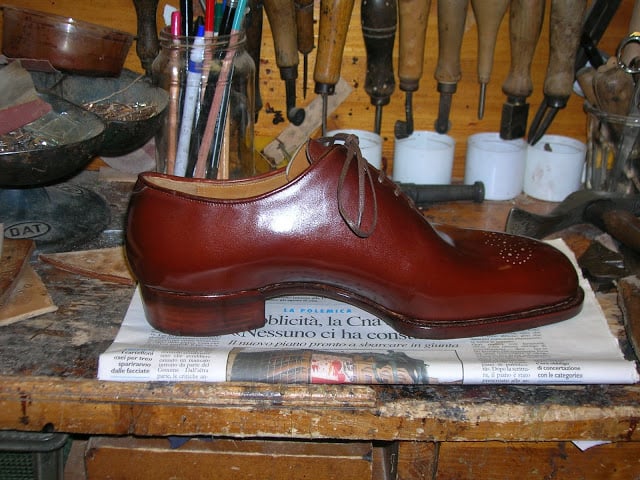 Let me first off start by saying one thing: a cobbler is not a shoemaker. This is one thing that bothers me and has just seem to have stuck in people’s heads since the dawn of time. Cobblers, at one point in time, did double as shoemakers and shoe menders, but in this day and age, they are simply people who fix other people’s shoes. Now don’t get me wrong cobblers can also be artisans, as shoe mending is quite different and can be quite difficult with respects to shoe making, but nevertheless, they are different. I state this because I feel that many people still believe that they are the same thing, or that they simply just don’t know that a bespoke shoemaker is by no means a cobbler. It’s like calling a pattern cutter (of suits) a tailor and asking him to hem your trousers. If you do this, you would be insulting that individual to the fullest, as their years of extensive training will seem like nothing. Same thing for a bespoke shoemaker. That being, let me get on with the rest of the post.

The reason that I am writing this, is because I had a less than satisfactory experience with a ‘cobbler’ here in London (back in 2012). I can’t really say that they did a bad job, but I do have to say that the service was quite disappointing to say the least. I had realized that I had quickly worn down my toe area and that if I wore my shoes any more I would grind it down to the welt. That being, I was in desperate need of some toe taps (aka blakeys and/or lulu’s). I thought that while I was at it, I would also ask them to replace the top piece of my heels as well. Now having done a bit of repairs while learning how to make shoes, I can do both of these things, but in reality can’t really be asked to do so as time is tight, space is limited (to make a mess) and the materials are sometimes hard to source, at least in small quantities. Therefore, I decided to go to a place that I had never tried (of which I won’t name) yet of which I had seen some of their work done on a customers’ shoes and knew that they could do a proper toe taps. Now, a proper pair of toe taps (Lulu’s as it were, as pictured above), is one that you have to slice a bit of the sole down in order to screw it on and then make flush with the rest of the sole. This is not to be confused with those rubbish blakelys that most cobblers here in England use in which they just nail on some piece of crap metal that falls off within a matter of single-digit wears.

I had used a few cobblers before here in England. One was in Brighton and the other was in the West End. The West Enders are pretty good, but will blurt out a price based on how I am dressing that day….nothing that seems to ever be fixed, which is a bit off-putting. While once replacing the top piece of my heels on one of my bespoke pairs, I had sent the shoes to a cobbler and when all done I had noticed that they had put on this “polish” that they use to finish off the shoes with those fast spinning brush wheels. This crap smelled like gasoline mixed with motor oil and was so horrible that it set into my leather immediately. Needless to say, as they were my black/red bespoke saddle shoes (my absolute favorites), I was furious. I immediately went back to work and stripped them down with alcohol in order to get that stuff off of my leather, before it ate it all away like termites on wood. So, having been scarred from this experience, I kindly asked the cobblers that I was now going to, to please not use any sort of varnish to finish my shoes and if necessary to replace the heel and leave the shoes as I would re-dye them myself. They assured me that they don’t use any chemical type stuff, so I trusted them. What a mistake that was…. 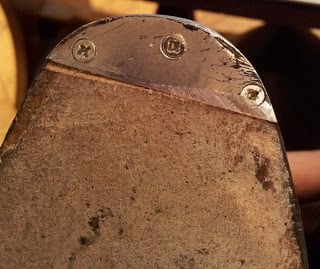 Needless to say, when I received the shoes back (from a delivery to my work as they were not done when I went in to get them, nor had even started), I immediately saw that they had used the very stuff that I had asked them not to, and it was already leaving salt-like stains on my leather. Because it was dire, I did not take a picture to show all of you, but quickly rubbed it all off before it began to ruin my leather. I also noticed that they did not use the same quality blakey that they had previously showed me in the shop, instead using a much cheaper and, in my opinion, more fragile looking one. And on top of that, they were incredibly crooked and were not flush with the sole, meaning that I was going to have to sand them down with a filer.

As you can imagine, I was quite disappointed and feel that I am not the only one who has used London cobblers and has felt the same. Time after time again, I see customers who have taken their shoes in for a re-sole and the job that has been done was appalling, so bad that the cobblers did not even bother to take out the old thread but just stitched right over it, creating a disgusting mess on the welt line. It makes me truly curious as to how London (England) is so famous for its shoemakers, but how awful many of their cobblers are. Truly astonishing….. Now, that being, I do get asked by many people to recommend a good cobbler here in London, but I really cannot do so with any confidence. Therefore I need your help. If you are a reader from London and know of a really good cobbler, please do share it in the comments section as I am sure that we would all appreciate it!

This post being a few years old, I wanted to share again with you the horrors of just using any old Cobbler. Today, I use Tony’s Shoe Repair in Crown Passage in St. James area. You can read about him HERE where he fixed this same pair of shoes and see the difference in the workmanship. 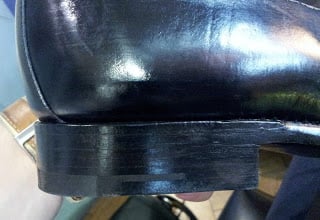 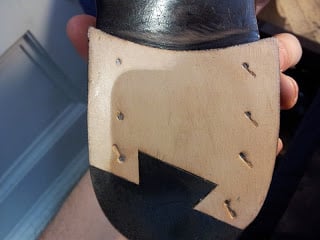