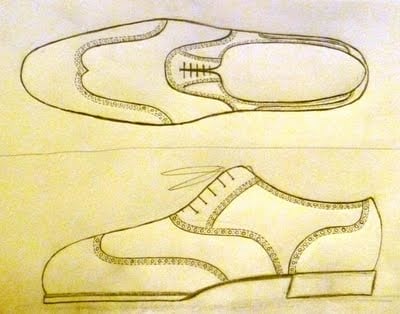 Let me start by saying that I do not have any formal schooling in design or drawing. The only skills that I have acquired were from when I was 5 years old and used to draw Teenage Mutant Ninja Turtles and Wolverine. Up until the beginning of this year, those were the last things that I drew. That being, ANYONE can become a designer. In reality, I have a feeling that many “designers” have no artistic skills whatsoever but they are, however, good at translating an image in their head to someone who does have artistic skills. That is the key! I know some shoe designers who just bypass altogether the sketching bit that I am about to show you and just go straight into making the technical design AKA the pattern. This is a lot harder to do and takes many years of doing it. What I am showing you today, are the basic skills to put together a sketch of a shoe, that can then be translated (with the help of a pattern maker) onto a 2-D pattern and then made into a 3-D upper. 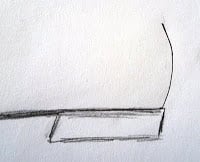 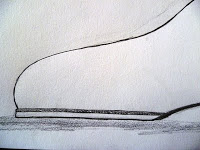 I tend to start at designing the sole. This will then allow me to understand the proportions of the foot (i.e. toe box, arch, heel counter), which will help me in drawing the upper outline and understanding where the curves need to be. It helps if you have a shoe in front of you, for your first attempts. As you can see, I tend to draw a much shorter toe area and put in a long arch. I just like the way this looks and it does not need to be absolutely perfect in proportion, as this is very hard to do, unless you are a superb sketcher. To make it look as real as possible, I tend to add the ridges that you have in the welt, as you can see in the close up picture. After I have done the sole, I create the top outline. To perfect this will take awhile and as you can see, I am still learning, as I have made my toe box a little tall. 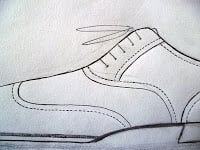 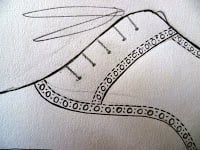 As I am designing a full-brogue, I will now start by adding all of the base lines to indicate where the wing-cap, facing, vamp, quarter and counter are going to be. Like I said before, for your first attempts, it is always easier to have an example either in front of you or a picture of a real shoe on the computer screen to help guide you. Over time, these lines will come natural to you and you won’t need anything but your mind to create the drawing. Now to create the brogueing, you have to design the stitching that follows these base lines. This can be difficult. What I do to make it as straight as possible, is draw another line that mimics the base line and is very faint. Once done, I will make little stitch-like dashes over the faint line that are much darker, by pressing harder on the pencil. I do that because I will then lightly erase over them and it should get rid of that faint line and leave just the stitch-like markings. After this is done, you just have to add the brogueing, which is essentially, but not necessarily, two little holes and then a big hole, one after another. This can be changed to your liking however. 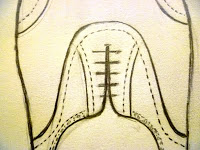 The next is designing the aerial view of the shoe. This is, by far, much harder in my opinion than drawing the side view. And as well, is less important, as a real pattern is done using the side view. But I like to draw this part to get a idea of the last shape from the top because one looks at his own shoes from this view. I always judge a shoe by first looking at it from the top, showing me what it might look like on my foot. Because if it does not look good from this view, I don’t want it! That being, I design the top view in the same manner as the side view, but obviously the proportions are going to change now and, in reality, without drawing this bit in 3-D, it will never look fully right. But I do my best, as you should, so that you can get a rough idea of how the design will look on the last shape. Hopefully the pictures will be self explanatory for this stage. Well, as you can see, it is really not that difficult to design a shoe. It just takes a little bit of patience and passion. And with those two things, you can become a shoe designer too! Best of luck…. 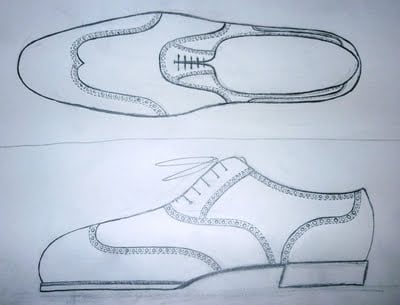