Report From The Super Trunk Show 2019 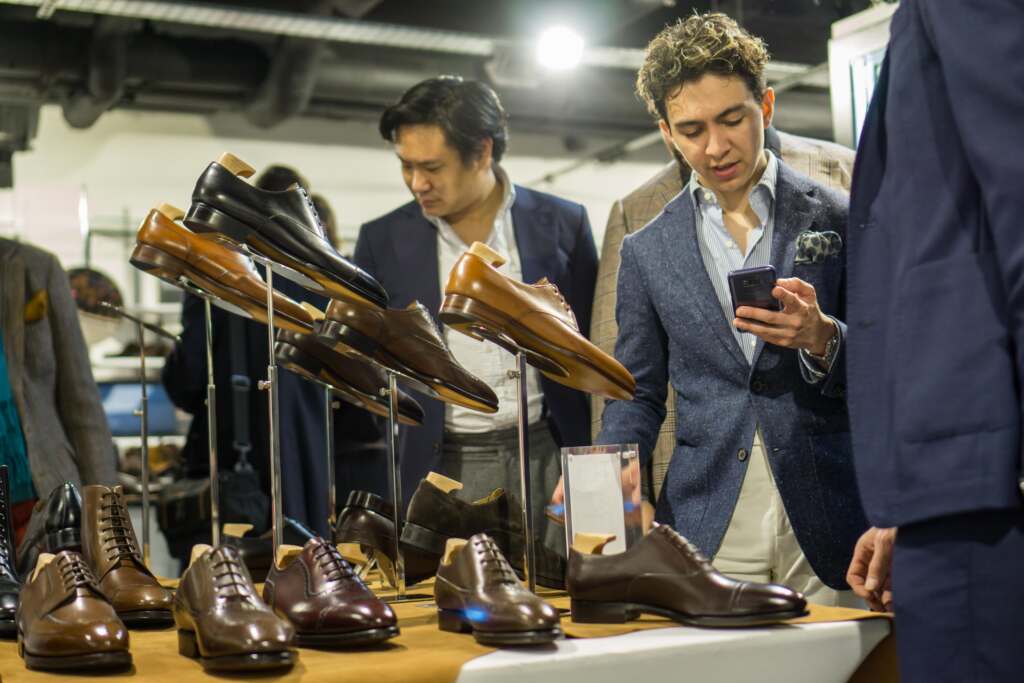 Last Saturday the third edition of the London super trunk took place, the world’s largest open event for classic men’s shoes. A huge success with new visitor record, around 1,000 people came into the doors throughout the day, to look and buy from the ten exhibitors, partners and follow the World Championships in shoe shining, shoe patina and shoemaking.

The event is hosted by Shoegazing and The Shoe Snob, and this year, we had a new venue, Showcase.co at 12 Regent Street, just below Piccadilly Circus and Jermyn Street in the middle of London. It’s on street level, bright and modern, with a better-located stage area and we also thanks to the Showcase staff managed to solve a bar serving beer, cava, coffee and snacks, which was a great addition. This together with the patina contest that was ongoing for the full day, we could see that people stayed around for more, and it was really crowded basically the whole day, and especially so around the stage happenings. Finally, a super trunk reached the magical 1,000 visitor bar (previous years it’s been around 800 in London, the record for the Swedish edition is 900). Many had traveled far for the event, which we are very happy about, and it’s been a sort of combined meeting place for the industry, contest happening and commerce fair. About 90 pairs of shoes plus lots of shoe care were sold, all at a value of about â‚¬43,000 / Ł37,000 (and plenty more often comes in the following weeks from people who tested shoes at the event).

It was also even more activity in social media around the event than before, which of course is great for all the brands and participants who spent money and efforts in being part, and for other people who couldn’t be there but was interested in seeing what was on display and what was going on with the contests. The two stage happenings were live-streamed both on Instagram and here on the blog (see the videos below), and both Saphir and the Hanger Project had film teams on-site who will produce lots of great video content.

We had nine exhibitors from all over the world showcasing their stuff (unfortunately a strike in France that interfered with trains from Paris to London hindered Altan Bottier to come). We had Bolero, Carmina, Gaziano & Girling(with a sample sale), J. FitzPatrick Footwear, JSEP, Japan Shoes Export Platform (Miyagi Kogyo, Oriental/Matsumoto and Kiten), Norman Vilalta, Project TWLV, Shoepassion / Heinrich Dinkelacker and Skolyx / TLB Mallorca. The main partner of the event was Saphir (shoe care), partner was J. Hopenstand (belts and accessories), both also exhibited. With the new venue, we tried to have more open planning with people walking around all tables (shelves along the walls made it possible to conveniently store all shoe boxes), which worked very well, and the atmosphere was great.

Already directly after opening the new competition for this year started – the World Championships in Shoe Patina. We had three finalists, Andrew Olender from Poland, Stephan Villette from France, and Samuel Norsworthy from the UK. With Saphir dye and shoe cream and wax they had five hours to transform a pair of TLB Mallorca crust leather shoes from their retailer Skolyx to something magnificent, quite tight with time, but some really nice results stood on the tables when they were finished. The jury had a really hard time to decide on the winner, all three had their strong sides, but in the end Stephan Villette and his very nicely-made shoe with super green transitions took the title, and became the first world champion in shoe patina. He won a shoe care kit from Saphir, the TLB shoes from Skolyx (who first will go with the shoemaking top three on the world tour), and of course the glass plaquette.

Then in the afternoon the always popular final of the World Championships in Shoe Shining, in collaboration with Saphir, took place. Three contestants have 20 minutes to polish up a Loake Aldwych in Mahogany as beautiful as possible. In the final we had Alexey Vrublevskiy from Russia, the Japanese Yuta Sugimura, and Caleb Malinowski from the US.

A big crowd followed the final (see film from it below), with the new stage area the view was a lot better for people, and when the 20 minutes were over the jury had three really nicely shined and good looking shoes to review. You can see all three below. Yuta Sugimura was awarded the world championship title, he had managed to achieve a very high shine on the toe and also much of the rest of the shoe, like sole edges etc.

Last year’s success the World Championships in Shoemaking, held in collaboration with Master Shoemakers and the Hanger Project, of course returned. Of the registered contestants we had 40 shoes sent in for the competition, all were supposed to make a dark brown full brogue oxford model with natural coloured sole, hand welted with handmade sole stitch, single leather sole. These were all on display during the event, and there were a wide variety of styles and make which gathered a lot of attention, and even more really amazingly made shoes than last year. The day before the shoes were reviewed anonymously by the jury, consisting of bespoke shoemakers and shoe experts. And here at the end of the event, we presented the top ten shoes, with then the top trio that will share the Ł6,000 prize sum, and go on tour to ten places around the world, including Isetan Men’s in Tokyo. Winning shoe was made by the Swede Daniel Wegan, second place went to Christophe Corthay from France, and third place to Japanese Eiji Murata. You can see a bit more of these three in this article, and then much more of them and all other shoes in the huge summary of the competition shoes to be published in a few weeks time. See the livestream from the award ceremony below.

Thanks to all who took part in the event and made it a great day, we already look forward to next year’s edition!

FILMS FROM THE TWO STAGE HAPPENINGS:

Final of the World Championships in Shoe Shining

Award ceremony for the World Championships in Shoe Patina and Shoemaking