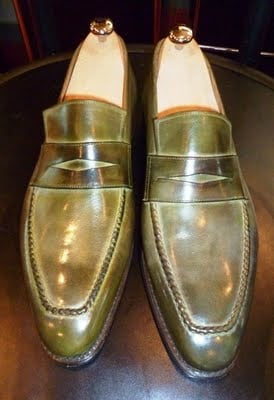 Among the more casual forms of dress shoes within the shoe industry are the lovely non-laced loafer shoes (or slip-on’s). Although the origin of loafers most likely trace back to way before the internet might tell me, the popularity of them came about around the 1930’s, when Norwegian shoemakers were exporting these moccasin like shoes to the rest of Europe. Apparently American tourists took a liking to them and Esquire magazine did a feature on them, enticing G.H. Bass to come out with their own version, called ‘Weejun’ (hence the name sounding like Norwegian). From that point on, they seemed to skyrocket in popularity with slit-strapped loafers being made and heavily worn by East Coast school prep’s who put pennies into the slit. From this trend, the term Penny Loafer (a version pictured above, by Septieme Largeur) came about, and seems to remain strong to this day. Now days we have all types of loafers and here I will begin to show all of you which ones are which. If I forget any, please feel free to add to the commentary.
Butterfly Loafers 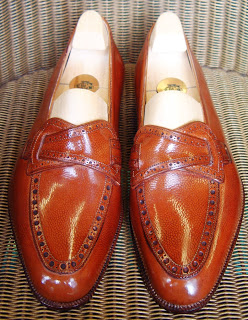 I had never known (or maybe had never thought about) the butterfly loafer before moving to England. Then again, this place has made me more conservative (not in thinking) in the year that I have been here and because of that I might have not even taken a second look at them prior to 2010, even if I had known about them. But nevertheless, I am glad that my views have changed, as I find them to be one of the nicer loafers in circulation. This pair here, a bespoke model by Gaziano & Girling, is slightly different than the way it is usually portrayed, in it’s classic sense, and that is without the brogueing on the straps. The butterfly loafer is said to have been created by Mr. George Cleverley himself and I must say that my hat is tipped to him, for I look at this and still see a loafer that is not only unique but elegantly timeless. This is one model of shoe that is surely on my to-get list!
Tassel Loafers 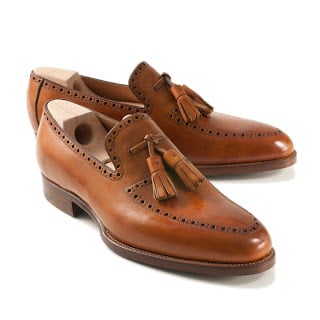 I tell you, there was nothing that I hated more than tassel loafers when I was young, and that is partly because I come from the States. Probably everyone can picture the guy who is wearing a baggy suit with those Cole Haan pinch tassel loafers (as we speak I am desperately trying to find a picture on Google of this, with no luck!), the ones that are super ugly with crappy leather and no shape at all. Anyway, this idea of wearing tassel loafers was ruined for me until I moved to Italy and saw how a man who knew how to dress well could pair his tassel loafers with his outfit and make them look quite nice, so long as they were not those shitty ones loved by American businessman. Surely you know what I am talking about? Anyway, I love them now, so long as they are done well, as the pair above are, by Saint Crispins.
Whole Cut Loafers 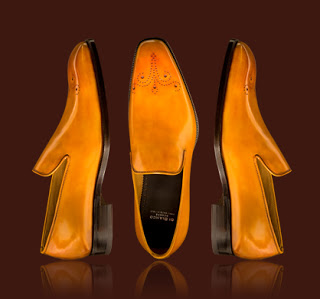 Whole cut loafers are among my favorite type of loafers, being that they have that minimalist look to them, which is strange, as I am by no means a minimalist. I don’t know. My tastes change everyday anyway. Tomorrow my favorites will be apron toed loafers……Back onto subject. I like them. They are simple, elegant and let’s not forget, cool (like these crazy banana yellow ones by Scarpe di Bianco). I believe that it takes a real shoe freak to like these, which is probably why you don’t find them often being offered by shoe brands. When on, they look like a boot, which most people don’t like to give that impression, especially when dressing in a suit. But when you have your inseam taken up to the point that the bottom of your trousers sit (with no break) on the top of your shoe with an opening of 14 inches, as I do, then you get to see the whole shoe, with no mistakes about it!
Prince Albert Loafers 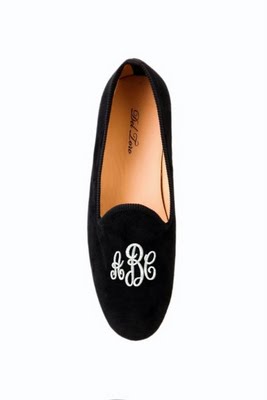 Popularized — at least one would think considering the name — by Prince Albert, who was a great sartorialist, the Prince Albert loafer is now what we think of when using dress slippers for the house to wear in velour and pair with our smoking jackets while drinking Loius XIII (Cognac). At least that’s what you see in the Ralph Lauren ads. But I like to think of them differently, like the one that I made, in brown, directly to your left. I hope to see these one day made with thicker soles and being worn on a daily basis as I think that they give the daring man a chance to be fun at throwing a nice, contrasting color of sock with this outfit, you know….to spice things up. (BTW, these are also a version of the whole cut loafer, but having a much larger opening for your foot)
Shoe By: Del Toro
Pumps 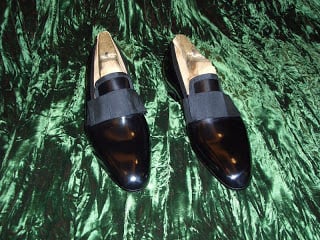 Pumps, you will find, are generally a shoe that you wear for formal occasions and will find them in some sort of patent leather form, as is the one at the top by Dimitri Bottier. But when one wants to be fun, you can find them in all sorts of arrangements, like these ostrich pumps by Barker Black. They are a fun shoe, but can really one be worn in certain environments, at least for most. I wouldn’t mind wearing them regularly, but then again, traveling to the SE of London most days, I might find myself in some predicaments…that was a joke, just in case you are traumatized. Moving swiftly on…pumps, I believe, got their name from their construction, which if the shoe is bespoke or high end, should be a pump stitch. Now, I know what this word is, but I have no idea what it means. I am pretty sure that it is some way of stitching the sole directly to the insole — by hand. But if you read the Carreducker’s blog and type in pump-stitch to their search bar, you will find a much better explanation, I am sure.
Kilty Loafers 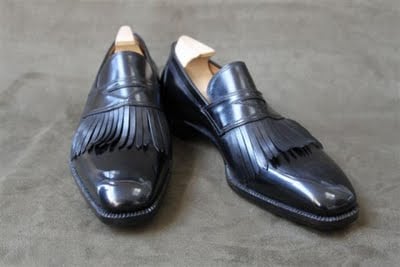 It should be easy to see where this name derives, as it is so clearly evident. Kilty loafers are usually something that you will see paired with tassels, but have been recently popularized by the likes of Italian shoemakers to make in other versions, such as this one here, by Riccardo Bestetti. I don’t really have much to say on these. Some I like, some I hate. To me they are strictly a shoe that is for fun, as I don’t see them as professional. I would rather wear them with jeans…
Side Gusset Shoes (AKA lazy man’s oxford – which is a loafer) 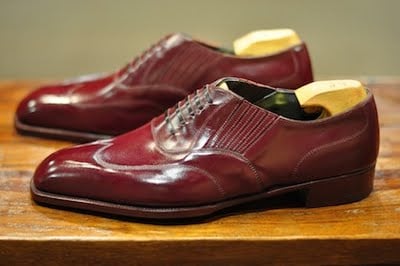 Aaawww, the side gusset shoe. Not sure that I could ever like this, as to me, it represents something that is fake, like a pre-made bow-tie. I just have never been the person for illusions in clothing, something trying to pass off as something that it is not. I mean, don’t get me wrong, the George Cleverley shoe above is beautiful, no doubt, but the side gusset with laces is just not my style. Now, on the other hand, if it did not have laces, then it would be okay, but you tend to find that the majority do, as this seems to be a new trend right now in the shoe industry, probably because many men are super lazy and can’t be fussed to lace their shoes but still want the professional look of an oxford.
Anyway, there are probably variations of many other loafers, but as usual, I am tired and think that the 2+ hours that I have spent on this post is good enough. So if I have missed anything, please feel free to comment. If not, enjoy the new week into September…
-Justin, “The Shoe Snob”
(oh yea, I have a picture of a side gusset shoe without laces, below by Koji Suzuki — beautiful!!) 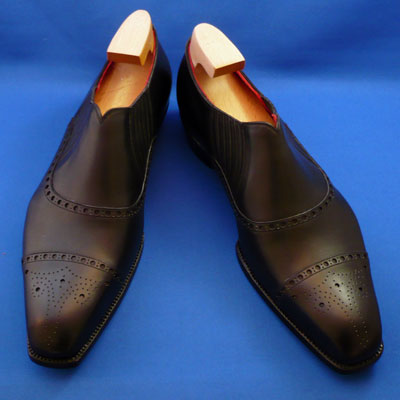