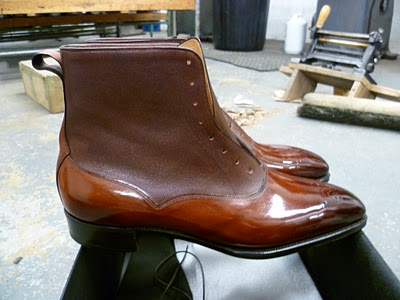 As you many very well know, boots come in all shapes, sizes and styles. And even today they are ever-evolving, as I shall share an example (of something new and unique) with you either tomorrow or for my shoes of the week post that I usually do on Fridays. I was never a huge boot fan until I saw my first spat boot. After that, it was pure love. Now, I want every kind of style of boot in every colorway. I even had 3 of them made up for my first collection. Quite a bit for an introduction to the world. But as the days go on, I feel that boots are becoming increasing sought after, as the homogeneity of low-cut shoes (aka normal shoes) begins to bore many individuals. They therefore look to something else. And that something else is very likely to be a boot.

Pictured Above & Below, Left: My own Gaziano & Girling ‘Wigmore’

Balmoral boots are are definitely among my top favorites of all the boot options. Let’s call them my adopted favorite. Adopted because the spat boot is my true favorite but considering the fact that they are very very hard to come by and will most likely run you a minimum of $1000, I have to say that for practical sake, the balmoral boot is what I prefer. What’s nice about them is the fact that they are simply a dress boot. A boot that you can wear as if it was a shoe, i.e. with your suits. Not too many other boots can do that, because at first site you can easily tell that they are a boot. But with a balmoral boot, it looks like a shoe when your trousers are covering it. I feel that for this very reason, they have become increasingly popular in recent times, as people may be bored of wearing traditional shoes and are therefore opting for something a little different, and this being the perfect example. 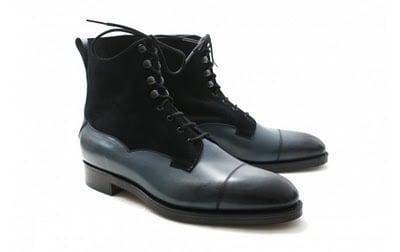 I can’t say that this is the exact proper name for them, but this is what I like to call them. They are really just like a balmoral except the fact that they have open lacing. Just as beautiful too, as they allow for a more casual look. This pair above, by Edward Green is probably the nicest derby boot I have ever seen and I could definitely see myself in this everyday, paired with my jeans. Then again, I could easily see myself in all of the boots that I am putting here, especially since I come to think about it, I really don’t own a pair of derby boots. Boots, in general, have definitely been something that I did not put much effort into getting, in the past. But now that I have amassed a huge collection of laced shoes, I think that I need build up my loafer and boot game.

As I have mentioned a million times before, I believe that men dressed at their best during the Edwardian and Victorian eras. Clothing seemed to be appreciated so much more and elegance was something to uphold. And during those times, many men wore high cut boots, particularly spat and balmoral boots. I don’t know why makers were inclined to make them then, but nowadays they are virtually unheard of in a ready-to-wear option. Maybe its because, today, men walk harder and are more aggressive in their nature, which makers feel that the buttons will therefore break too easily. This will then cause headaches for the customer with the broken buttons and in turn will lead to the manufacturers having to deal with those broken buttons. Whatever the case, it sure is sad that they are not more readily available.

Chukka boots are among the most versatile shoes in the shoe industry. If done right a chukka boot, such as the one picture above, can transition between jeans and suits within the same wear. The cleanliness of them, being that they tend to be stitch free on the vamp and toe area, allows for them to dressed up. But at the same time, the fact that they still are a boot gives it that automatic jean and casual appeal. Out of all of the shoes that I own, I am almost without a doubt that aside from my commuter shoe (which does not count), I have worn my chukkas more than anything. You just can’t beat their versatility!

This is the second time that I have seen this done before. The first time was by Japanese bespoke shoemaker, Imai Hiroki (pictured below). It’s like an oxford version of a chukka boot. It’s quite strange to see in picture, but they look really nice in person, as I was able to check out the last time that I was in Paris at the SL shop. My only concern with them is the ankle area and how it will feel with that whole piece of leather. But then again, it would most likely not be designed and selling if it was not comfortably wearable. They are pretty cool nonetheless. Being a whole cut fan weather it a laced shoe, loafer or boot, means that I have to like this one too! I just need to get my hands on a pair! 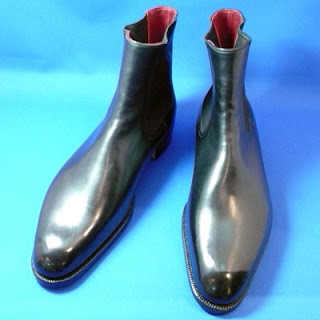 Ahh, the chelsea boot. Probably my least favorite boot, up until recently, which as I stated above will share with you on Friday. I don’t know why I have never really been the biggest fan of them. I guess it’s because I really see that gore as being too casual to be “nice.” Don’t get me wrong, a good chelsea boot is an amazing casual shoe, but it’s tough to make them dressy. This Koji Suzuki model above is probably the nicest that I have ever seen. He seemed to make all of the proportions in just the right way, allowing for a sleek and dressy look. It may seem trivial, but I believe that for a chelsea boot, getting these proportions down right is much harder than it seems, at least to make the boot on the dressy side. Beatle boots are another form of chelsea boots except that they are cut much more lower. It became a style that was popularized by the rock group, The Beatles in the 1960’s. They can also have a zipped side, but they are usually regarded to be a descendant of the chelsea boot. Beatle boot picture below by Corthay. 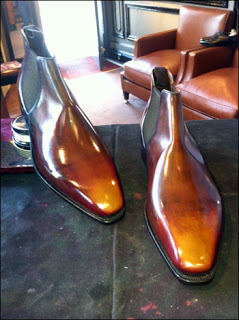 Originally used as a riding boot, the jodhpur boot has now been transformed to be one the coolest jeans boots ever. Not really that dressy due to the straps, I find them to be perfect as a great jean boot. There is something that is rugged and manly about them, even though they look nice and elegant. Another boot that I do not own, but will definitely be adding to the collection!