The Only Dress Shoe Ever Really Needed – The Black Wholecut

This title might sound like shoe lover blasphemy, and believe me I can’t say that I would ever think of just having one, but…..if life presented itself with this situation, it’s best to be equipped with what is going to get you through it all. What made me think of this was a discussion that was occurring on Style Forum (a while back) in regards to one’s absolute shoe essentials. One gentleman stated that instead of having multiple essentials, he would have preferred to have just one shoe that could get him through each and every situation. Now, he did not mention the black wholecut, and this is where him and I will differ but I got to thinking about people out there who may only be able to afford getting just one or simply can’t justify having multiple options. That being, thinking about society, ‘the rules’ and ‘norms’, and all of the different possible outfits one would need in life, I decided to create my own little idea of what would be the best option out there for all around purposes. And because I once learned in philosophy class at Uni that every statement needs to be argued against and then re-argued for, I will list my don’ts and do’s below.

What Not To Wear Black Wholecuts With

In all of the shoe-dom, there is not one shoe style that goes with everything, not even the versatile brown full brogue (can’t pair it with black!). And while you might think that a black shoe can go with most things…let me tell you that the wholecut is just not any ‘ol black shoe. It’s in another category due to it’s cleanliness look from being virtually stitch free. That being, there are some types of trousers that just won’t measure up to the aesthetic of the black wholecut. For example, jeans being one of them. While I am a total jean guy and do like to wear my leather soled shoes with jeans, I don’t think that I would ever pair a black wholecut with them. It’s just too contrasting: a mega-dress shoe with real casual trousers (jeans). It just doesn’t work. Same thing with khakis, they are simply too casual for the likes of the black wholecut. It would not look right, as neither would anything green or brown. Now you might feel that there are many things limiting here….but in reality, how often do you wear green or brown trousers? Khakis and jeans are much more common, but are also much more casual and hence the title being about a dress shoe, I feel that this is not so bad!

What To Wear Black Wholecuts With
Now this list is going to be much more extensive, not so much in option of clothing, but in colors that the average person uses. Think about what we wear most: grays and blues (mostly navy), particularly in our suiting. While I used to not be an advocate of pairing navy with black, the more I find myself here in England, the more I find it acceptable. While it still would not ever be my preferred pairing, it does look good when needing to be elegantly conservative. That being, you satisfy most of your professional wardrobe, not to mention anything that is formal. In reality, you don’t need a patent shoe, but just need to put a real nice shine on a black wholecut and instead of being like everyone else at the black tie event, you will be the one with a brilliant shine and a much more elegant shoe (in my opinion). As for other occasions, what do you wear when going to an interview? What do you wear when going to a nice dinner? You wear black shoes. And the wholecut, being the most elegant of all, will neither look too formal nor too shabby. It will be the safe choice. Obviously, these are not end-all-be-all rules, but when talking about the one shoe that will safely get you by in every occasion, you can’t go wrong with the black dress shoe, and even more so, than the minimalist wholecut. So, if you are a young chap looking for your first dress shoe, look no further than a lovely black wholecut oxford! 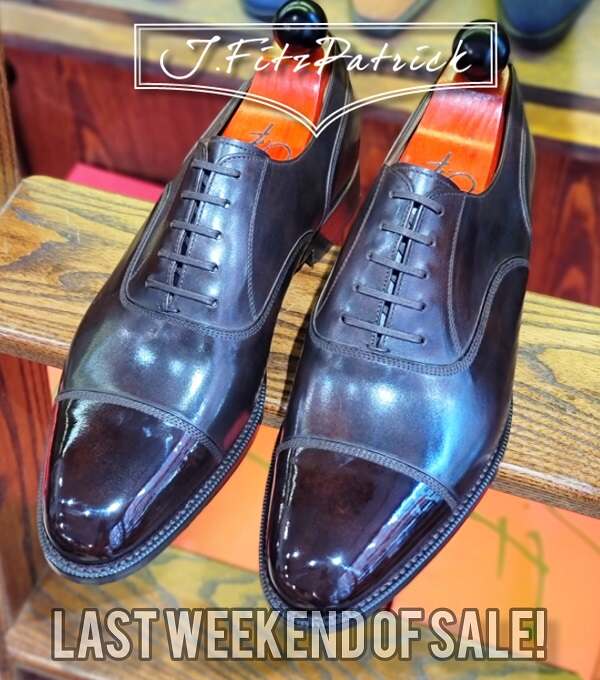