Leather Creases. Plain and simple. There is no such thing as crease-free leather. Frankly, the thought of people thinking that leather should not crease is just absurd. So many times have I heard people complaining about wrinkled leather and thus blaming either the leather or the maker for this reason. Well allow me to tell you that there are so many more factors that play into a shoe’s leather becoming prominently wrinkled, factors that you have probably never thought about nor even knew existed. The main point however of this post, will not be about me trying to tell you that all cases of leather wrinkling are warranted but rather that a good deal of it is and it has nothing to do with the quality of the leather. I say this because I have seen the best leather wrinkle like there is no tomorrow (on a bespoke shoe no less) and the worst leather maintains perfect shape. Therefore allow me to shed some light on what makes leather wrinkle more so on some shoes and less so on others. 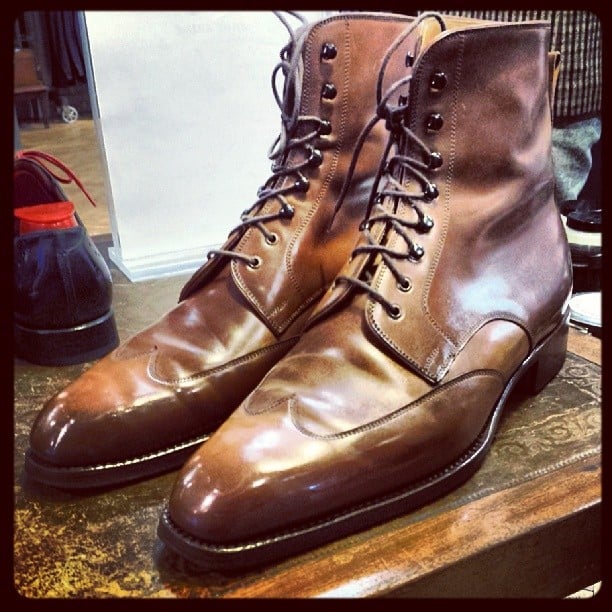 Let me start by saying that bad fit will certainly lead to bad creasing, but that does not mean that good fit won’t either. For example, let’s take myself. I have very shallow feet which leads to most shoes not being a stellar fit. This means that more likely than not, there will be a good amount of space between the top of my foot (not the tip, the top) and the lining of the shoe. That means there is excess space. That excess space means that the leather has more room to bend when I flex my shoe. Contrarily, that means that a person with a foot that has girth will have less space between the top of his shoe and the lining and therefore allow for less room for the leather to crease inwards. For me this can lead to prominent creasing, but that does not mean that I could have taken another size and it would have been fixed, i.e. the shoe is not a bad fit, but it is not bespoke either. This also does not necessarily mean that the person with the bigger foot will not crease. It means that I am more likely to have prominent creasing and he is less likely but then this is simply one factor that comes to play. 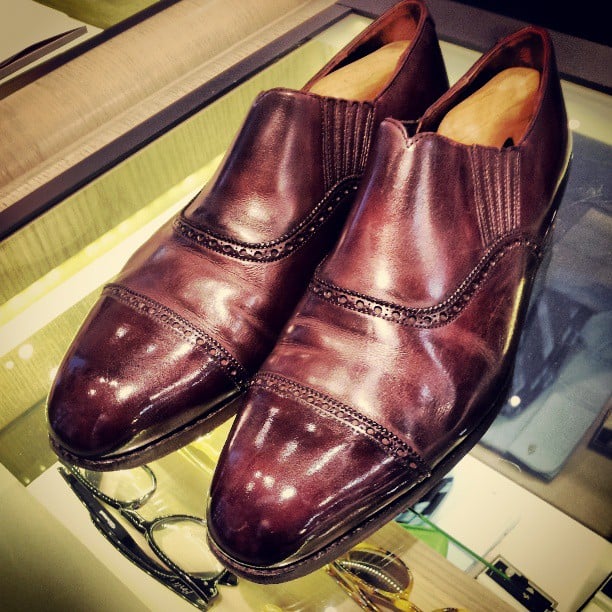 Leather will now be the next thing that comes about. Good or bad leather do not make a difference most of the time. Of course, real bad belly leather is already creased and will do so even further, but most good makers are not using a ton of this so lets rule this out for the sake of argument. And I have seen the highest grade leather crease like crazy and low grade leather keep it’s shape. As an observation that I have noticed in my time shining shoes, the highest grade of French calfskin seems to crease quite easily and prominently. I have noticed it not only on my bespoke shoes that I made while with Bemer, but on Corthay shoes, John Lobb and Berluti shoes. But the slightly lower grade French calfskin, like on my own J.FitzPatrick shoes among the many other makers at my price-point, do not seem to crease nearly as much. But that does not make our leather superior. On the contrary, the higher grade leather feels so much nicer and more comfortable on my foot. But it does crease more for some strange reason….

The next and one of the most critical reasoning for leather creasing is the model of shoe. Plain toe shoes will always crease more and whole cuts in general will most likely crease the most. This has everything to do with not only the lasting machines that are used for shoemaking but also the tension in the upper and where the pieces of the upper lay on the shoe. You will most likely notice the least amount of wrinkling on a full or semi cap toe brogue as there are many pieces that are thus not as affected by the tension that your foot puts onto the leather. I have seen wholecuts that have around 5 lines of creasing all the way from the end of the facing, down to the toe cap. You would never really see that on a full brogue and the pattern has every reason to do with that. But that does not mean that the wholecut is an inferior pattern, on the contrary it’s one of the hardest to make, but it just so happens to leave that blank canvas that creates a shoe susceptible to creasing…. 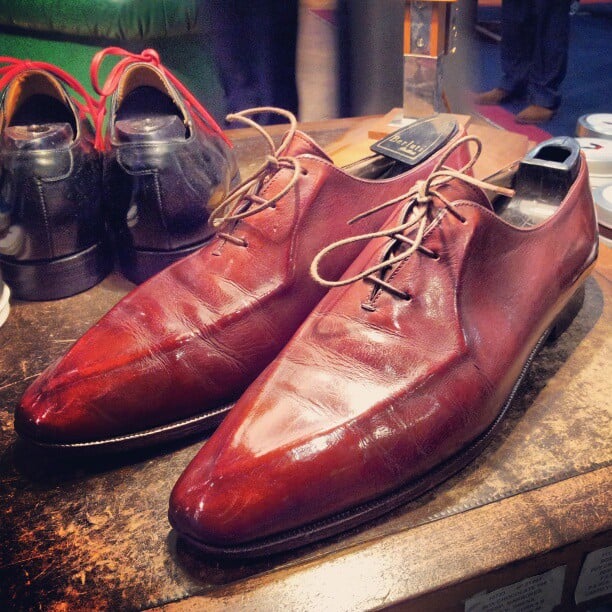 The last reason that you find some shoes creasing more than others has to do with how long they allow the upper to sit on the last thus creating a form-fitting shape. The longer the upper is allowed to form to the last, the better the shoe should hug your foot, and thus provide a better fit that theoretically should decrease the chances of prominent creases as there will not be a lot of excess space inside the shoe. The less time that the upper sits on the last and does not form as well, the more loose space you will find in your shoe while wearing it and the more chance that you will obtain prominent wrinkles. Now, to top it all off, one must realize that every single shoe will be different depending on the foot that is inside of it, what part of the hide that shoe’s leather came from, how it was lasted, how long the upper stayed on the last and then how the person wears his shoes (tight or loose). There are more obscure reasons as well, but then this post would be about a book long!

You take in all these factors for every single pair of shoes and feet inside them and the outcome determines the amount of creasing. You can take the exact same shoe and two different people who take the same size, and creasing between them will be different. Guaranteed. One could have regular non-prominent creasing while the other has tons of it.?I would also be willing to wager that you could take the same person and the two pairs of the same shoe and the creasing would be different between the two pairs, because no two shoes used the same exact leather (place on the hide) or were lasted exactly the same. That being, there really is no one explicable reason why a shoe’s leather is creasing. IT JUST HAPPENS!!

That being, look at all of these high quality shoes with tons of creases and some of them even being bespoke, which just goes to show you that leather quality and fit are not necessarily the reason for prominent creasing…..