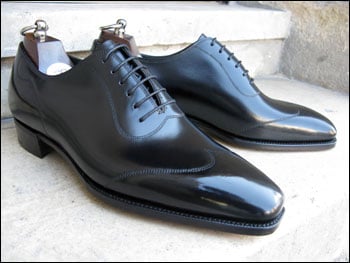 I have always been a very observant person, particularly when it came to one’s attire. Like many people have been so bold to claim (even myself), ‘you can tell about a person based on his outfit,’ and in my opinion, particularly when it comes to his shoes. This is precisely why many interviews end in a matter of seconds. Because your appearance, whether you know it or not, speaks wonders about not only who you are, but also how you will be.

Before I ever came to England, as many people may think about what they might see (sartorially), I thought of well-dressed gentlemen, three-piece suits, tweed, heavy brogues, cravats etc. I thought that I would see a bunch of well-dressed English gentlemen, particularly on Savile Row. But sadly, things have changed here, as they have in America, in Italy and most likely, all over the world. The younger generation tend not to appreciate putting all of the pieces of their wardrobe puzzle together, as thoughtfully or as elegantly as their grandfathers did. While I have my own theories on why this may be, it is beginning to speak wonders as the age of cheap shoes and companies knocking off others is growing bigger and more powerful. Hence, why Kurt Geiger owns either Selfridges or Harrods entire shoe floor (think Nordstrom with more shoes), and stocks cheap shoes, like the one below, at a place that sells luxury clothing. 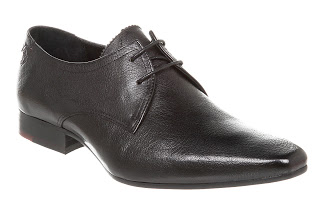 Because of this naive generalization that I had, I am always looking at men’s outfits, particularly at their feet, hoping to catch a glimpse of greatness. And I must say, that I have definitely seen some people that stacked up as some of the sharpest dressers that I have yet to see, but sadly I have also seen some of the worst. The biggest discrepancy here, especially with these young gentleman, is that they could not care less about their shoes. They wear these absolute rubbish, cheap shoes and pair them with their nice (or decent) suits. It’s the most contradictory thing that I have ever seen. I mean, look at the difference between the top pic and the one directly above. Do you think that the second shoe should be paired with any suit above 500 GBP or any suit at all? It’s a glued on rubber (or some sort of cheap composite material) sole that looks awful and even makes your expensive suit look bad. Granted, I know that everyone does not have the money to go out and get G&G’s or Edward Green’s, but there are other alternatives that are much more cost-conscious but will still leave you looking presentable, like Loake or Herring. 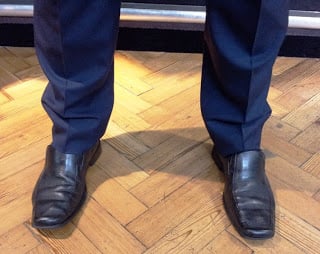 The good snob that I am, I asked three of my friends at work to be guinea pigs for my blog post and they so fortunately agreed. Therefore I have put them in order of worst to best (up to down) in how I find their sartorial knowledge of pairing expensive suits with shoes. Luckily one of my better friends (good ‘ol Colin, above) at work is not so sensitive and allowed me to use him as an example of someone who just a) abuses his shoes, b) has the cheapest shoes ever and c) wears them EVERYDAY!!! I always give him a hard time, saying that if he is going to be working on a street like Savile Row, then he should not only get better shoes but also take better care of them. I mean if I walked into a store like Gieves & Hawkes, I would not feel that I could take any advice from a guy who shoes were just simply thrashed. A well-dressed gentleman, needs to be a well-dressed gentleman from head to toe. Yet, you find here in England, that Colin is the majority and my friends below are the minority and I just don’t get it, as this used to be a country where the majority of men were sharp from top to bottom. 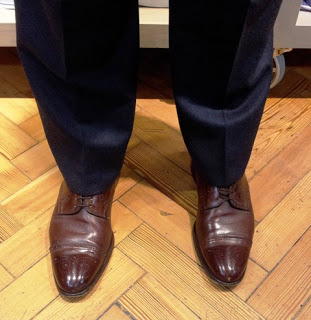 Asking my friend above why he thought many people shirked out on their shoes, he told me that because many feel they shouldn’t spend a lot of money on something that they are going to be using to walk on concrete. What’s funny about this, is it is precisely why you should invest in a good pair of shoes. Because concrete is hard and is not natural to the human body for walking, and therefore the support system in our body needs to be properly held. The only way to come close to doing this is with good shoes. Shitty one’s don’t provide anything but a cheap price tag and a bad look. In my opinion, it’s because people just aren’t really educated anymore in the ways of appreciating one’s attire. Used to be that men would sit down every night and brush their nice leather shoes, to remove all of the dirt and dust. It would surprise me now if most men just kick off their shoes and throw them into the closet for the next day. But why? Why spend all of your money on your suit and just leave yourself looking like a fool with your $100 shoes??? 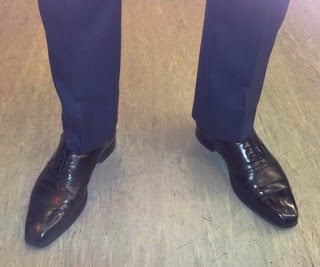 PrevPreviousShoes Of The Week – Saint Crispins
NextWhat I Am WearingNext